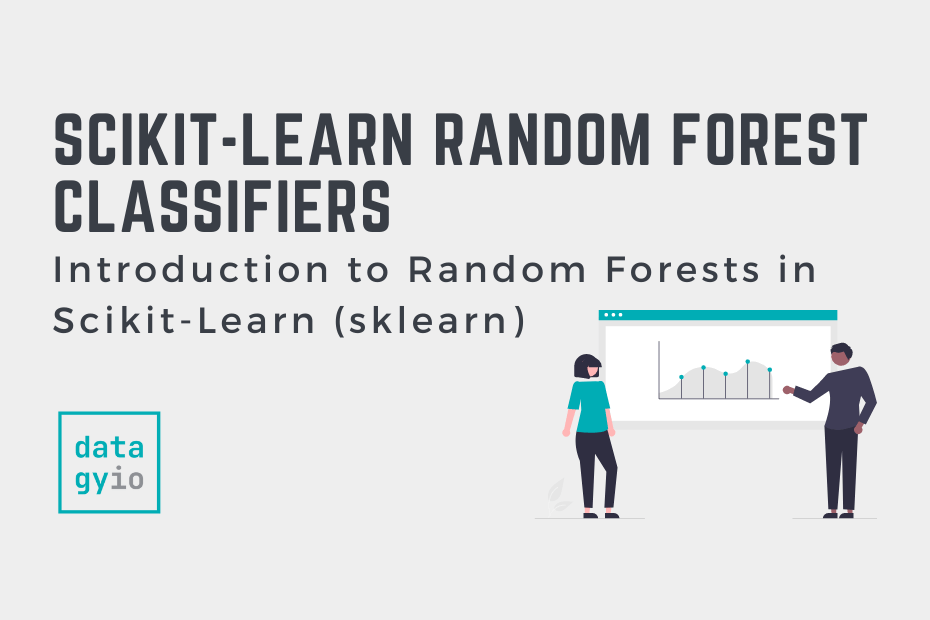 In this tutorial, you’ll learn what random forests in Scikit-Learn are and how they can be used to classify data. Decision trees can be incredibly helpful and intuitive ways to classify data. However, they can also be prone to overfitting, resulting in performance on new data. One easy way in which to reduce overfitting is to use a machine learning algorithm called random forests.

A Recap on Decision Tree Classifiers

A decision tree classifier is a form of supervised machine learning that predicts a target variable by learning simple decisions inferred from the data’s features. The decisions are all split into binary decisions (either a yes or a no) until a label is calculated. Take a look at the image below for a decision tree you created in a previous lesson:

In this tree, you can see that in the first node, the model looks at the petal length. If the length in centimeters is less than or equal to 2.5 cm, the data moves into another node. On the left, a label is reached and the sub-tree ends. On the right, the data splitting continues, this time looking at petal width.

When building a decision tree algorithm, you can set many different parameters, including how deep the tree should be. A deeper tree may mean higher performance for the training data, but it can lead to overfitting. This means that the model performs very well with training data, but may not perform well with testing data.

This is where random forest classifiers come into play. In the next section, you’ll learn what these classifying algorithms are and how they help you with the problem of overfitting your model.

An Overview of Random Forest Classifiers

A random forest classifier is what’s known as an ensemble algorithm. The reason for this is that it leverages multiple instances of another algorithm at the same time to find a result. Remember, decision trees are prone to overfitting. However, you can remove this problem by simply planting more trees!

The idea behind is a random forest is the automated handling of creating more decision trees. Each tree receives a vote in terms of how to classify. Some of these votes will be wildly overfitted and inaccurate. However, by creating a hundred trees the classification returned by the most trees is very likely to be the most accurate.

The image below shows five different decision trees being created. Each of these trees gets a vote and the classification with the most votes is the one that’s returned.

In many cases, however, there are significantly more than five trees being created. In the example you’ll take on below, for example, you’ll create a random forest with one hundred trees!

Let’s start off by loading a sample dataset. In this example, you’ll learn how to create a random forest classifier using the penguins dataset that is part of the Seaborn library. The dataset provides information on three different species of penguins, the Adelie, Gentoo, and Chinstrap penguins. The image below shows an Adelie penguin:

Let’s load the dataset to see what you’re working with:

The dataset provides a number of data columns, some of which are numeric and others are categorical. In the end, you’ll want to predict a penguins species using the various features in the dataset. Let’s take a look at some of these columns:

Machine learning models have some limitations:

By reviewing the information returned by the .info() method, you can see that both of these problems exist in the dataset. In order to be able to use this dataset for classification, you’ll first need to find ways to deal with missing and categorical data. This is exactly what you’ll learn in the next two sections of the tutorial.

Dealing with Missing Data in Scikit-Learn

While the .info() method tells us a little bit about non-null data, this can often be harder to interpret. Let’s calculate the number of missing values in each column by chaining the .isnull() and .sum() methods:

When dealing with missing values, you have two main options:

For the most part, much of the data is there. Scikit-Learn comes with a class, SimpleImputer, that allows you to pass in a strategy to impute missing values. We can, for example, impute any missing value to be the mean of that column. Let’s see how this can be done using Scikit-Learn:

Let’s explore what we did here:

Imputing categorical data can be a lot more complicated, especially when dealing with binary distributions. Because of this, we’ll drop any of the records where sex is missing:

Now, we can make sure there are no missing data elements in the DataFrame by running our earlier code again:

In the next section, you’ll learn how to work with categorical data in Scikit-Learn.

Dealing with Categorical Data in Scikit-Learn

Similar to dealing with missing values, machine learning models can also generally only work with numerical data. Because of this, we need to convert our categorical data into numerical data. Let’s deal with the sex variable first. Because the sex variable is binary (either male or female), we can assign the vale of either 1 or 0, depending on the sex. This can be done easily with the .map() Series method.

In the code above, you passed a dictionary into the .map() method. The dictionary contained a binary mapping for either 'Male' or 'Female'.

The other categorical value is the 'island' feature. Let’s see what the unique values in this column are:

In the case of the 'island' feature, there are three values. Because of this we can’t simply pass in a binary mapping. Similarly, passing in values of 0, 1, 2 would also present problems, because the values don’t actually imply a hierarchy. The difference between 0 and 2 would amplify any decisions our random forest would make.

A simple way to deal with this would be to use a process referred to as one-hot encoding. The unique values of that column are used to create columns where a value of either 0 or 1 is assigned. The image below shows what this process looks like:

Scikit-Learn comes with a helpful class to help you one-hot encode your categorical data. This class is called the OneHotEncoder and is part of the sklearn.preprocessing module. Let’s see how you can use this class to one-hot encode the 'island' feature:

Now that you’ve dealt with missing and categorical data, the original columns can be dropped from the DataFrame. Let’s do this now:

In the next section, you’ll learn how to use this newly cleaned DataFrame to build a random forest algorithm to predict the species of penguins!

Now, let’s dive into how to create a random forest classifier using Scikit-Learn in Python! Remember, a random forest is made up of decision trees. But that doesn’t mean that you need to actually create any decision trees! Scikit-Learn can handle this using the RandomForestClassifier class from the sklearn.ensemble module. Let’s begin by importing the required classes.

Let’s explore what we did in the code above:

Now it’s time to fit our data to the model. We can do this using the aptly-named .fit() method, which takes the training features and labels as inputs. From there, we can make predictions on our testing data using the .predict() method, by passing in the testing features.

Evaluating the Performance of a Random Forest in Scikit-Learn

Because we already have an array containing the true labels, we can easily compare the predictions to the y_test array. Scikit-learn comes with an accuracy_score() function that returns a ratio of accuracy. Let’s see how this works:

This shows that our model is performing with 97% accuracy!

One of the difficulties that you may run into in your machine learning journey is the black box of machine learning. Because libraries like Scikit-Learn make it so simple to create a random forest, it can be helpful to look at some of the details of your model.

One way of doing this is by actually analyzing the patterns that the decision trees that make up the model look like. It may not be practical to look at all 100, but let’s look at a few of them.

In the code above, we imported the matplotlib.pyplot library and the plot_tree function. The plot_tree() function required us to provide a tree to plot. Here, we could access a tree from our random forest by using the .estimators_ property which holds all the trees. The feature_names are the columns of our features DataFrame, X. The class_names are our unique species.

The image below shows the twelth decision tree in the random forest. This tree uses a completely different feature as its first node.

In this tutorial, you learned how to use random forest classifiers in Scikit-Learn in Python. The section below provides a recap of what you learned: