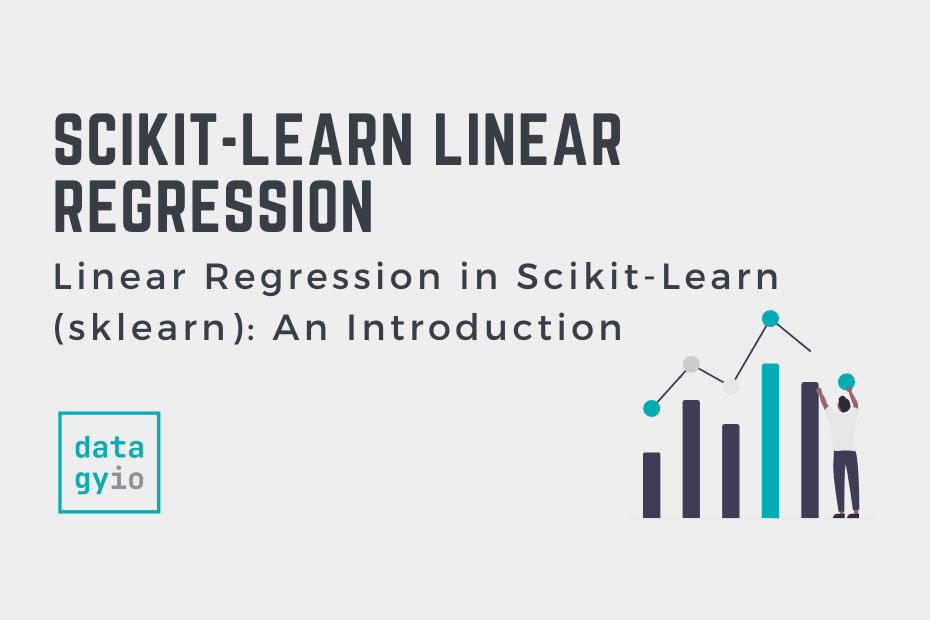 What is Linear Regression

Let’s get started with learning how to implement linear regression in Python using Scikit-Learn!

The dataset that you’ll be using to implement your first linear regression model in Python is a well-known insurance dataset. You can find the dataset on the datagy Github page.

To explore the data, let’s load the dataset as a Pandas DataFrame and print out the first five rows using the .head() method.

By printing out the first five rows of the dataset, you can see that the dataset has seven columns:

For this tutorial, you’ll be exploring the relationship between the first six variables and the charges variable. Specifically, you’ll learn how to explore how the numeric variables from the features impact the charges made by a client.

Before going any further, let’s dive into the dataset a little further. Let’s confirm that the numeric features are in fact stored as numeric data types and whether or not any missing data exists in the dataset. This can be done by applying the .info() method:

From this, you can see that the age, bmi, and children features are numeric, and that the charges target variable is also numeric.

Pandas makes it very easy to calculate the coefficient of correlation between all numeric variables in a dataset using the .corr() method. Let’s apply the method to the DataFrame and see what it returns:

From this, you can see that the strongest relationship exists between the age and charges variable. It’s still a fairly weak relationship. Let’s see what other insights we can get from the data.

Plotting a Pairwise Plot of the Data

A pairwise plot shows the relationship between pairs of variables. The plot shows a scatterplot of each pair of variables, allowing you to see the nuances of the distribution that simply looking at the correlation may not actually indicate. Let’s import seaborn and plot a pairwise plot using the .pairplot() function.

It looks like the data is fairly all over the place and those linear relationships may be harder to identify. However, if you look closely, you can see some level of stratification. For example, the pairplots for charges and age as well as charges and BMI show separate clusters of data.

Let’s see how we can apply some of the other categorical data to see if we can identify any nuances in the data. Because the smoker variable is a binary variable (either “yes” or “no”), let’s split the data by that variable. This can be done by passing in the hue= parameter.

From this, you can see that there are clear differences in the charges of clients that smoke or don’t smoke. Let’s take a closer look at the relationship between the age and charges variables. This can be done using the relplot() function in Seaborn.

This is great! Aside from a few outliers, there’s a clear, linear-looking, trend between the age and charges for non-smokers. Remember, when you first calculated the correlation between age and charges was the strongest, but it was still a weak relationship. Now that you know that smoking is a strong determinant in charges, let’s filter the DataFrame to only non-smokers and see if this makes a difference in correlation.

The correlation between age and charges increased from 0.28 to 0.62 when filtering to only non-smokers. Let’s focus on non-smokers for the rest of the tutorial, since we’re more likely to be able to find strong, linear relationships for them.

What linear regression does is minimize the error of the line from the actual data points using a process of ordinary least squares. In this process, the line that produces the minimum distance from the true data points is the line of best fit.

This object also has a number of methods. One of these is the fit() method, which is used to fit data to a linear model. Let’s see how can learn a little bit about this method, by calling the help() function on it:

As with other machine-learning models, X will be the features of the dataset, while y will be the target of the dataset. In this case, we’ll start off by only looking at a single feature: age. Let’s convert age to a DataFrame and parse out charges into a Series.

In the code above, you used double square brackets to return a DataFrame for the variable X. We can confirm the types by using the type() function:

Now that we know that X is two-dimensional and y is one-dimensional, we can create our training and testing datasets.

Now that our datasets are split, we can use the .fit() method to fit our data. Let’s pass these variables in to create a fitted model. We’ll use the training datasets to create our fitted model.

Now that our model has been fitted, we can use our testing data to see how accurate the data is. Because in the case of regression, our labels are continuous, we can use a number of different metrics. The table below breaks down a few of these:

Scikit-learn comes with all of these evaluation metrics built-in. We can import them from the metrics module. Let’s load them, predict our values based on the testing variables, and evaluate the effectiveness of our model.

These results aren’t ideal. The r2 value is less than 0.4, meaning that our line of best fit doesn’t really do a good job of predicting the charges. However, based on what we saw in the data, there are a number of outliers in the dataset. Because the r2 value is affected by outliers, this could cause some of the errors to occur.

Let’s see if we can improve our model by including more variables into the mix.

In this section, you’ll learn how to conduct linear regression using multiple variables. In this case, rather than plotting a line, you’re plotting a plane in multiple dimensions. However, the phenomenon is still referred to as linear since the data grows at a linear rate.

Scikit-Learn makes it very easy to create these models. Remember, when you first fitted your model, you passed in a two-dimensional array X_train. That array only had one column. However, you can simply pass in an array of multiple columns to fit your data to multiple variables. Let’s see how this is done:

It looks like our results have actually become worse! Knowing that smoking has a large influence on the data, we can convert the smoker column into a numerical column. Since this is a binary question, we can convert the value of 'yes' to 1 and 'no' to 0. Following that, we can simply pass in the data and evaluate our model:

In this case, while our r2 value increases, as did our errors. Logically, this makes sense. We are now fitting the line on a dataset of a much larger spread. Because of this, the line may fit better, while the overall variance of the data varies too.

If you’re satisfied with the data, you can actually turn the linear model into a function. With this function, you can then pass in new data points to make predictions about what a person’s charges may be. Let’s see how you can do this.

The model has two attributes:

The number of coefficients will match the number of features being passed in. Let’s see what they look like:

We can easily turn this into a predictive function to return the predicted charges a person will incur based on their age, BMI, and whether or not they smoke. Let’s create this function now:

Now, say we have a person who is 33, has a BMI of 22, and doesn’t smoke, we could simply pass in the following arguments:

In the case above, the person would likely have just under $4,000 of charges!

It’s time to check your learning. Try and complete the exercises below. If you need a hint or want to check your solution, simply toggle the question.

How would you include the sex variable in the regression analysis?

You could convert the values to 0 and 1, as they are represented by binary values.

Since these are not binary variables, you cannot encode them as 0 and 1. However, it probably does not make sense to encode them as 0, 1, 2, … This is because there is no intrinsic hierarchy in them. Read this article on one-hot encoding and see how you can build the region variable into the model.

In this tutorial, you explore how to take on linear regression in Python using Scikit-Learn. The section below provides a recap of what you learned:

9 thoughts on “Linear Regression in Scikit-Learn (sklearn): An Introduction”