Calculate and Plot a Correlation Matrix in Python and Pandas 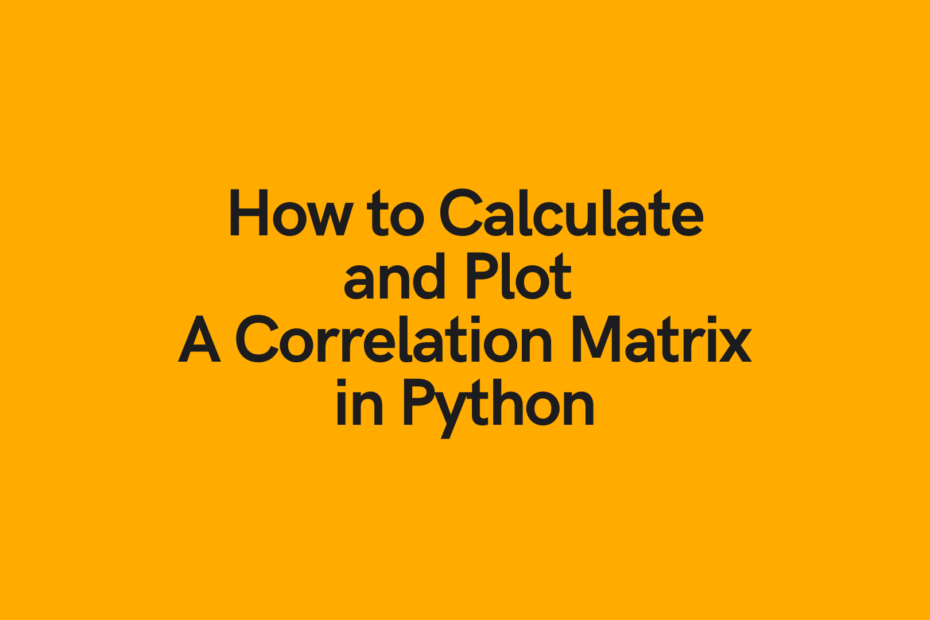 The Quick Answer: Use Pandas’ df.corr() to Calculate a Correlation Matrix in Python

What a Correlation Matrix is and How to Interpret it

A correlation matrix is a common tool used to compare the coefficients of correlation between different features (or attributes) in a dataset. It allows us to visualize how much (or how little) correlation exists between different variables. This is an important step in pre-processing machine learning pipelines. Since the correlation matrix allows us to identify variables that have high degrees of correlation, they allow us to reduce the amount of features we may have in a dataset. This is often referred to as dimensionality reduction and can be used to improve the runtime and effectiveness of our models.

Let’s see what a correlation matrix looks like when we map it as a heat map. Here, we have a simply 4×4 matrix, meaning that we have 4 columns and 4 rows.

If you have a keen eye, you’ll notice that the values in the top right are the mirrored image of the bottom left of the matrix. This is because the relationship between the two variables in the row-column pairs will always be the same. It’s common practice to remove these from a heat map matrix in order to better visualize the data. This is something you’ll learn in later sections of the tutorial.

Calculate a Correlation Matrix in Python with Pandas

Pandas makes it incredibly easy to create a correlation matrix using the dataframe method, .corr(). The method takes a number of parameters. Let’s explore them before diving into an example:

By default, the corr method will use the Pearson coefficient of correlation, though you can select the Kendall or spearman methods as well. Similarly, you can limit the number of observations required in order to produce a result.

Now that you have an understanding of how the method works, let’s load a sample Pandas Dataframe. For this, we’ll use the Seaborn load_dataset function, which allows us to generate some datasets based on real-world data. We’ll load the penguins dataset. Seaborn allows us to create very useful Python visualizations, providing an easy-to-use high-level wrapper on Matplotlib.

We can see that our dataframe has 7 columns. Some of these columns are numeric and others are strings.

Calculating a Correlation Matrix with Pandas

Now that we have our Pandas Dataframe loaded, let’s use the corr method to calculate our correlation matrix. We’ll simply apply the method directly to the entire dataframe:

We can see that while our original dataframe had seven columns, Pandas only calculated the matrix using numerical columns. We can see that four of our columns were turned into column row pairs, denoting the relationship between two columns.

For example, we can see that the coefficient of correlation between the body_mass_g and flipper_length_mm variables is 0.87. This indicates that there is a relatively strong, positive relationship between the two variables.

We can round the values in our matrix to two digits to make them easier to read. The matrix that’s returned is actually a Pandas Dataframe. This means that we can actually apply different dataframe methods to the matrix itself. We can use the Pandas round method to round our values.

While we lose a bit of precision doing this, it does make the relationships easier to read.

In the next section, you’ll learn how to use the Seaborn library to plot a heat map based on the matrix.

How to Plot a Heat map Correlation Matrix with Seaborn

In many cases, you’ll want to visualize a correlation matrix. This is easily done in a heat map format where we can display values that we can better understand visually. The Seaborn library makes creating a heat map very easy, using the heatmap function.

Let’s now import pyplot from matplotlib in order to visualize our data. While we’ll actually be using Seaborn to visualize the data, Seaborn relies heavily on matplotlib for its visualizations.

Here, we have imported the pyplot library as plt, which allows us to display our data. We then used the sns.heatmap() function, passing in our matrix and asking the library to annotate our heat map with the values using the annot= parameter. This returned the following graph:

We can see that a number of odd things have happened here. Firstly, we know that a correlation coefficient can take the values from -1 through +1. Our graph currently only shows values from roughly -0.5 through +1. Because of this, unless we’re careful, we may infer that negative relationships are strong than they actually are. Further, the data isn’t showing in a divergent manner. We want our colours to be strong as relationships become strong. Rather, the colours weaken as the values go close to +1.

We can modify a few additional parameters here:

Let’s try this again, passing in these three new arguments:

This returns the following matrix. It diverges from -1 to +1 and the colours conveniently darken at either pole.

In this section, you learned how to format a heat map generated using Seaborn to better visualize relationships between columns.

Plot Only the Lower Half of a Correlation Matrix with Seaborn

One thing that you’ll notice is how redundant it is to show both the upper and lower half of a correlation matrix. Our mind’s can only interpret so much – because of this, it may be helpful to only show the bottom half of our visualization. Similarly, it can make sense to remove the diagonal line of 1s, since this has no real value.

In order to accomplish this, we can use the numpy triu function, which creates a triangle of a matrix. Let’s begin by import numpy and adding a mask variable to our function. We can then pass this mask into our Seaborn function, asking the heat map to mask only the values we want to see:

We can see how much easier it is to understand the strength of our dataset’s relationships here. Because we’ve removed a significant amount of visual clutter (over half!), we can much better interpret the meaning behind the visualization.

How to Save a Correlation Matrix to a File in Python

The file allows us to pass in a file path to indicate where we want to save the file. Say we wanted to save it in the directory where the script is running, we can pass in a relative path like below:

In the code shown above, we will save the file as a png file with the name heatmap. The file will be saved in the directory where the script is running.

In some cases, you may only want to select strong correlations in a matrix. Generally, a correlation is considered to be strong when the absolute value is greater than or equal to 0.7. Since the matrix that gets returned is a Pandas Dataframe, we can use Pandas filtering methods to filter our dataframe.

Since we want to select strong relationships, we need to be able to select values greater than or equal to 0.7 and less than or equal to -0.7 Since this would make our selection statement more complicated, we can simply filter on the absolute value of our correlation coefficient.

Let’s take a look at how we can do this:

Here, we first take our matrix and apply the unstack method, which converts the matrix into a 1-dimensional series of values, with a multi-index. This means that each index indicates both the row and column or the previous matrix. We can then filter the series based on the absolute value.

Selecting Only Positive / Negative Correlations in a Correlation Matrix

Let’s first see how we can select only positive relationships:

We can see here that this process is nearly the same as selecting only strong relationships. We simply change our filter of the series to only include relationships where the coefficient is greater than zero.

Similarly, if we wanted to select on negative relationships, we only need to change one character. We can change the > to a < comparison:

To learn more about the Pandas .corr() dataframe method, check out the official documentation here.

To learn about related topics, check out the articles listed below: