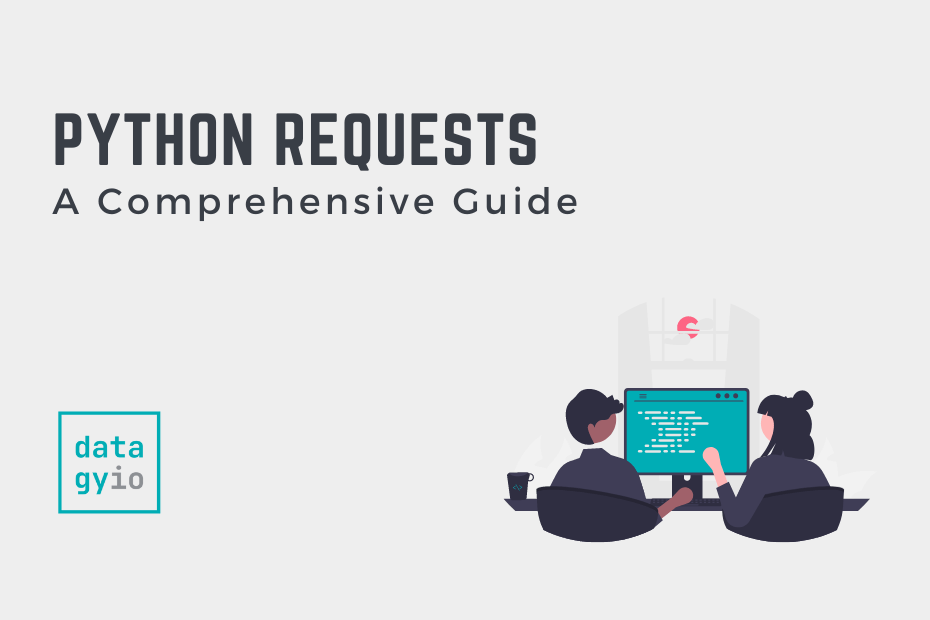 The Python requests library in Python allows you to send HTTP requests easily. The library abstracts much of the complexity of making requests, by using a simple and consistent API. This guide provides an in-depth view of the essential aspects of the requests library and points to further guides that go even deeper.

By the end of this guide, you’ll have learned:

What is the Python Requests Library?

The Python requests library is a Python library that handles making HTTP requests. The library is well known for being simple and elegant, by abstracting away much of the complexity of working with HTTP requests.

The library is also one of the more popular libraries available in Python: it currently draws around 30,000,000 downloads per week and is in use by over 1,000,000 repositories on Github.

How Do You Install the Python Requests Library?

The simplest way to install the requests library is to use the Python pip package manager. In order to install the latest version of the library, you can simply call the following command in the command prompt or terminal.

To install a specific version of the library, such as version 2.28.1, you can write the following command:

It’s as easy as that! In the following section, you’ll learn how to install the requests library on macOS using the pip package manager.

Making HTTP GET Requests with the Python Requests Library

The .get() function accepts two parameters:

Let’s see how we can use the get() function to make a GET request:

Let’s break down what we did in the code above:

The Response object has a number of different properties and methods that we can access to learn more about the data that has been returned.

Some of the key properties and methods available to a Response object include:

In the following section, you’ll learn how to make POST requests using the Python requests library.

An HTTP POST request is used to send data to a server, where data are shared via the body of a request. In the request.post() function, data are sent with the data parameter, which accepts a dictionary, a list of tuples, bytes or a file object.

Let’s take a look at what the requests.post() function looks like in Python:

We can see that the function accepts three parameters:

To illustrate using this function, we’ll be using the https://httpbin.org/ website, which allows us to place actual POST requests.

In the example above, we simply pass the URL to the /post endpoint into the requests.post() function. We then print the response that we get back, which returns a Response object.

HTTP headers allow the client and server to pass additional information while sending an HTTP request or receiving a subsequent response. These headers are case-insensitive, meaning that the header of 'User-Agent' could also be written as 'user-agent'.

HTTP headers allow the client and server to pass additional information while sending an HTTP request or receiving a subsequent response. These headers are case-insensitive, meaning that the header of 'User-Agent' could also be written as 'user-agent'.

Query string parameters allow you to customize a GET request by passing values directly into the URL or into the params= parameter.

There are three ways to accomplish creating query parameters:

Let’s see how we can use the first method to accomplish this:

Even when you don’t pass in headers, headers will be returned in a Response object. The headers are accessible via the .headers attribute, which returns a dictionary.

Let’s see how we can return the headers available in a Response object:

In the code block above, we used a get() function call to get a Response object. We then accessed the headers of the response by accessing the .headers attribute.

How to Understand Responses from HTTP Requests in Python Requests

The Python requests library returns a Response object when any type of request is made, including POST and GET requests. The Response object contains useful attributes and methods that help in understand the response.

Before diving further, let’s see how we can create a Response object and verify its type:

We can see that when we make a request, in this case a GET request, a Response object is returned.

Understanding whether or not a request was successful is, of course, a very important part of understanding a response. The requests.Response object provides a number of different ways to do this. Let’s explore two key attributes:

A common task you’ll want to take on is seeing the body of a response that gets returned when a request is made. There are a number of simple ways in which we can do this:

Both of these methods work well for accessing the content of the response. Using the .text attribute simply converts the values to a string for easier access.

How to Convert Python Requests Responses to JSON

The requests library comes with a helpful method, .json(), that helps serialize the response of the request. In order to look at an example, let’s the public endpoints provided by the website reqres.in. These endpoints work without signing up, so following along with the tutorial is easy.

Let’s see how we can access the /users endpoint and serialize the response into a Python dictionary using the .json() method:

From the code above, we can see that applying the .json() method to our response created a Python dictionary.

How to Authenticate HTTP Requests with Python Requests

The Python requests library provides a number of different ways to authenticate requests, which are covered in detail in this post. Let’s first take a look at basic authentication.

Let’s see how we can pass in a username and password into a simple GET request using the HTTPBasicAuth class:

Let’s break down what we did in the code above:

If you were using this method, you’d change 'user' and 'pass' to the username and password of your choice.

Because the basic authentication method is used so frequently, the requests library abstracts away some of this complexity. Rather than needing to create a new HTTPBasicAuth object each time, you can simply pass a tuple containing your username and password into the auth= parameter.

In the code above, we were able to significantly reduce the complexity of our code. The Python requests library handles a lot of the boilerplate code for us!

To learn more about other forms of authentication, check out this dedicated article on authenticating HTTP requests with Python.

How to Create Sessions with Python Requests

What’s great about requests Session objects is that they allow you to persist items, such as authentication, across multiple requests. This allows you to, for example, scrape websites much more elegantly than you may otherwise.

An important thing to note is that a session object has access to all the methods of the main Requests API.

You can create a session object by instantiating a Session class, as shown below:

In the following section, you’ll learn how to set headers for a Python requests Session.

Let’s see how this can be done using Python:

In the example above, we created a Session object. Then, we assigned a tuple containing a username and password to the .auth attribute of the Session object.

How to Set Timeouts for HTTP Requests with Python Requests

By default, the Python requests library does not set a timeout for any request it sends. This is true for GET, POST, and PUT requests. While this can prevent unexpected errors, it can result in your request running indefinitely.

Because of this, it’s important to set a timeout to prevent unexpected behavior.

In order to set a timeout in an HTTP request made via the requests library, you can use the timeout parameter. The parameter accepts either an integer or a floating point value, which describes the time in seconds.

It’s important to note that this behavior is different from many other HTTP request libraries, such as those in JavaScript. In other libraries or languages, this behavior tends to be expressed in milliseconds.

Let’s take a look at an example of how we can send a GET request with a timeout:

In the example above, we set a timeout of 3 seconds. We used an integer to represent the time of our timeout. If we wanted to be more precise, we could also pass in a floating point value:

By passing in a single value, we set a timeout for the request. If we wanted to set different timeouts for connecting and reading a request, we can pass in a tuple of values.

How to Use Proxies When Using Python Requests

In order to use proxies in the requests Python library, you need to create a dictionary that defines the HTTP, HTTPS, and FTP connections. This allows each connection to map to an individual URL and port. This process is the same for any request being made, including GET requests and POST requests.

It’s important to note that while the connections map to individual URLs and ports, they can actually point to the same URL and port.

Let’s see how you can define a set of proxies for the Python requests library:

Let’s break down what we did above:

In this guide, you learned how to use the Python requests library to make HTTP requests. The library provides a lot of functionality to streamline and simplify making HTTP requests and working with their responses.

Tags:FeaturedPythonPython Requests
previousUsing a Proxy Server with Python requests
nextHow to Add a New Column to a Pandas DataFrame