Python f-strings: Everything you need to know! 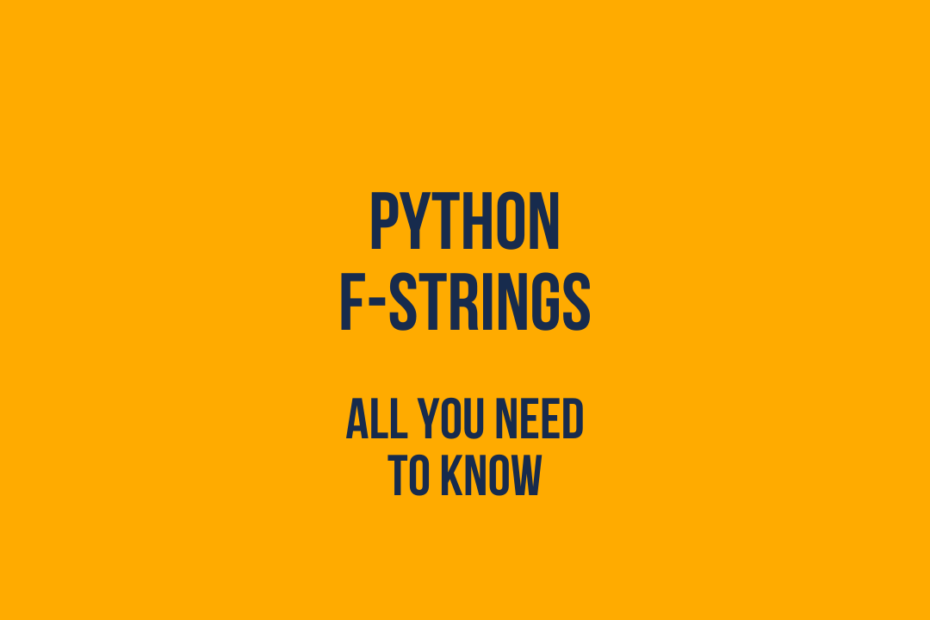 Python f-strings, or formatted string literals, were introduced in Python 3.6. They’re called f-strings given that they are generated by placing an “f” in front of the quotation marks. What makes f-strings special is that they contain expressions in curly braces which are evaluated at run-time, allowing you large amounts of flexibility in how to use them!

Python f-strings (formatted string literals) were introduced in Python 3.6 via PEP 498. F-strings provide a means by which to embed expressions inside strings using simple, straightforward syntax. Because of this, f-strings are constants, but rather expressions which are evaluated at runtime.

How to write Python f-strings

You write Python f-strings by writing two parts: f (or F) and a string (either single, double, or triple quotes). So, an f-string can look like this:

Where string is replaced by the string you want to use.

f-strings make it incredibly easy to insert variables into your strings. By prefacing your string with an f (or F), you can include variables by name inside curly braces ({}). Let’s take a look at an example:

A key advantage of Python f-strings is the ability to execute expressions at runtime. What this means, is that you aren’t restricted to only inserting variable names. Similar to the example above, place your code into the string and it will execute as you run your program.

Let’s take a look at a basic example:

What’s more, is that you can even act on different variables within f-strings, meaning you can go beyond the use of constants in your expressions. Let’s take a look at another example:

Being able to print out dictionary values within strings makes f-strings even more powerful.

One important thing to note is that you need to be careful to not end your string by using the same type of quote. Let’s take a look at an example:

Similarly, you can loop over a list of items and return from a list of dictionaries. Let’s give that a try!

Python f-strings also allow you to evaluate conditional expressions, meaning the result returned is based on a condition.

Let’s take a look at a quick, simple example:

This can be very helpful when you’re outputting strings based on (for example) values and want the grammar to be accurate. Let’s explore this with another example:

Say you wanted your text to specify he or she in a sentence depending on the person’s gender, you could write:

To specify alignment with f-strings, you can use a number of different symbols. In order to format strings with alignment, you use any of <, >, ^ for alignment, followed by a digit of values of space reserved for the string. In particular:

Let’s take a look at an example:

This can be helpful to print out tabular formats

F-strings can also be used to apply number formatting directly to the values.

Python can take care of formatting values as percentages using f-strings. In fact, Python will multiple the value by 100 and add decimal points to your precision.

Formatting Numbers to a Precision Point

To format numbers to a certain precision point, you can use the 'f' qualifier. Let's try an example to three decimal points:

You can use the fixed point in combination with your currency of choice to format values as currency:

You can format values with comma separators in order to make numbers easier to ready by placing a comma immediately after the colon. Let's combine this with our currency example and two decimal points:

As a final example, let's look at formatting values in exponential notation. To do this, simply place an 'e' after the colon:

Debugging with f-strings in Python

Beginning with Python 3.8, f-strings can also be used to self-document code using the = character.

This is especially helpful when you find yourself typing print("variable = ", variable) frequently to aid in debugging.

This can be especially useful when you find yourself debugging by printing a lot of variables.

f-strings are immensely valuable tool to learn. In this post, you learned how to use f-strings, including placing expressions into them, using conditionals within them, formatting values, and using f-strings for easier debugging.

14 thoughts on “Python f-strings: Everything you need to know!”