Python Exponentiation: Use Python to Raise Numbers to a Power 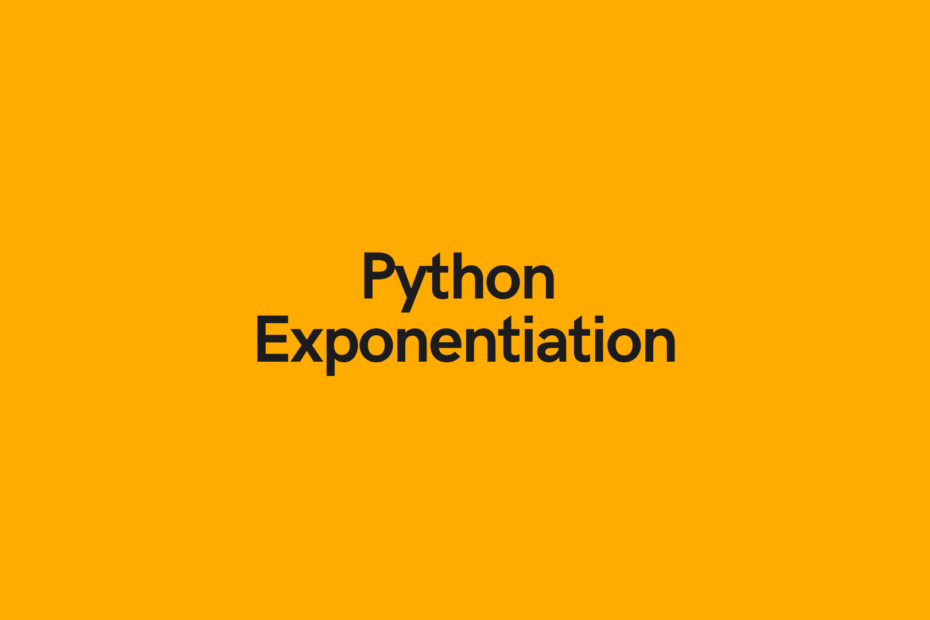 Exponentiation in Python can be done many different ways – learn which method works best for you with this tutorial.

The Quick Answer: Use pow()

Following the above example, 2 to the power of 3, means multiplying 2 by itself three times, like this: 2 * 2 * 2. It may seem easy enough to do this for integers, but the problem comes when you’re raising numbers to fractional powers, such as 21.4. For this, it’s much better to use the help of some mathematical tools.

Let’s get started with learning how to use Python for exponentiation.

Python comes with many different operators, one of which is the exponent operator, which is written as **. The operator is placed between two numbers, such as number_1 ** number_2, where number_1 is the base and number_2 is the power to raise the first number to.

The Python exponent operator works with both int and float datatypes, returning a float if any of the numbers are floats. If all the numbers are integers, then it returns an integer.

Let’s try a few different examples, passing in floats, integers, and a mix of both to see what the results will look like:

In the next section, you’ll learn how to use the built-in pow() function to raise a given number to a power.

How to Use the Python pow Function to Raise a Power

While using the Python power exponent operator is very useful, it may not always be intuitive as to what you’re hoping to accomplish. Because of this, it can be helpful to use a function that guides you and readers of your code to see what you’re doing. For this, we can use the built-in pow() (power) function.

The python pow() function will always return an integer exponentiation, when the two values are positive integers. When returning a negative power or a float power, the values will be floats. Similarly, if any value is a float, a float will be returned.

Let’s try a few examples to see what the results look like:

In the next section, you’ll learn how to use the math.pow() function to raise a number to a power using Python.

How to Python math.pow to Raise a Number to a Power

Similar to the built-in function pow(), the math library also has a function that let’s you raise a number to a power. This function can be called using the math.pow() function.

Let’s see how we can use the function to emulate the results from the section above:

We can see here, that all numbers that are returned are of type float.

Raise All Numbers in a Python List to a Power

There may be many times where you’re working with a list of numbers and you want to raise them all to a particular power. For this, we can use either a for loop or a Python list comprehension.

Let’s see how we can first use a Python for loop to accomplish this:

What we do here is loop over each item in a list, apply the pow() function, and append it to a new empty list.

Now let’s see how we can turn this for loop into a list comprehension:

To learn more about the math.pow() function, check the official documentation here.