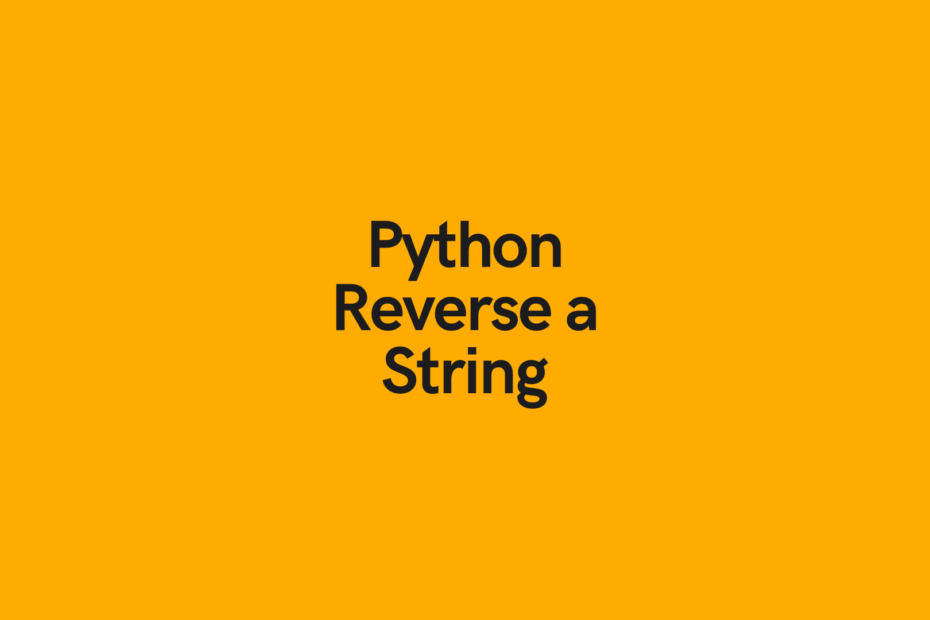 In this tutorial, you’ll learn how to use Python to reverse a string. Knowing how to work with strings is an incredibly useful skill. In particular, reversing a string is a problem that will often come up in programming interviews.

You’ll learn why reversing a string doesn’t work as you’d expect, and different ways you can use to reverse a string in Python. You’ll learn how to use string indexing, list reversing, a Python for loop, a while loop, recursion, and a custom function to make your code more readable.

The Quick Answer: Use String Indexing to Reverse a String in Python

Why Strings are Tricky to Reverse in Python

Strings in Python are immutable, meaning that they cannot be changed. This is different than other objects, such as lists, which allow for us to easily reverse them, using built-in methods.

In order to reverse a string, we need to create a new string, rather than modify its original.

This is an important concept to understand since its a question that frequently occurs in programming interviews. While you may not often encounter this in your day-to-day programming adventures, it’s important to keep it in the back of your mind.

Now, let’s learn how to reverse a string with Python.

Python strings are indexed objects, meaning that we can access their items using their index.

Python indices begin at 0 on increase by 1. Similarly, we can access an object’s last item by accessing its negative index, which begins by -1, and decreases by 1.

One great advantage of Python indexing is that we can use a step variable to iterate over an object that is indexed. The step variable is the third item in an index, which allows us to set how we move over an item.

Now that you have a strong understanding of how string indexing works in Python, let’s see how we can use it to accomplish our goal:

We can see here that we were able to reverse our string. This worked because we set the optional third parameter, the step parameter, to -1. This allows us to traverse the string in a negative order.

In the next section, you’ll learn how to create a custom function that makes this approach easier to read.

Because Python doesn’t have a clear, understandable method to reverse strings, it may be helpful to you and your code’s readers to create one. While it may seem trivial to do this, as the code will only be a single line, it makes it immediately clear what your code is doing.

Let’s see how we can use the string indexing method and create a custom function:

Using this method increases readability of your code. In the next section, you’ll learn how to use Python lists to accomplish this goal!

Use Python Lists to Reverse a String

Because Python strings are iterable objects, we can easily turn them into lists. Lists in Python come with built-in tools to allow us to reverse them. You can learn all about these methods in my in-depth tutorial, which guides you through six different ways to reverse a list in Python.

In the next section, you’ll learn how to use a Python for loop for this purpose.

Use a Python For Loop to Reverse a String

We can also use a Python for loop to return a string in its backward order.

In order to do this, we can loop over each item in its reverse order and append it to a new string.

In the next section, you’ll learn how to use a while loop to reverse a string in Python.

Use a Python While Loop to Reverse a String

A Python while loop can also return a string in its backward order.

Let’s take a look at how we can do this and then explore why it works:

Let’s take a look at why this works:

In the next section, you’ll learn how to use recursion to reverse a string.

Reverse a String with Python Recursion

Recursion can be a difficult concept to wrap your mind around, but also a helpful tool once you understand it.

To use a recursive method, we need to create a function that will call itself until a certain condition is met.

Let’s see how we can use recursion to reverse our string:

In this tutorial, you learned how to use Python to reverse a string. This is an important skill to know, especially in beginner programming interviews. You learned the best method to accomplish this, string indexing, and how to convert this to a very readable function to help guide readers of your code. You learned some alternative methods, including using for loops and while loops, as well as list methods and recursion.

To learn more about string indexing in Python, check out the official documentation here.

To learn more about related topics, check out the resources below: