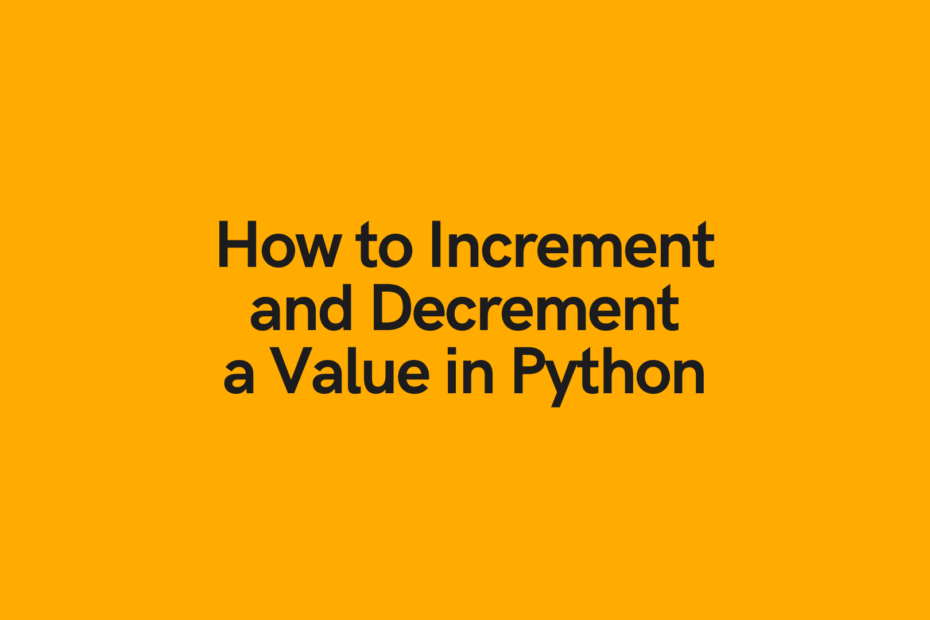 Why is the increment operator important? It may seem pedantic to want to learn how to increase or decrease the value of a variable by the value of one. However, it actually has many very valuable applications. For example, you may want to run a while loop for a given number of times. This can be done easily while decreasing a variables numbers. Alternatively, you may want to develop a game where it’s important to keep track of the number of turns a player has played.

The Quick Answer: Use += or -= Augmented Assignment

How to Increment a Value by 1 in Python

If you are familiar with other programming languages, such as C++ or Javascript, you may find yourself looking for an increment operator. This operator typically is written as a++, where the value of a is increased by 1. In Python, however, this operator doesn’t exist.

Let’s try to implement the increment operator in Python and see what happens:

We can see that when we try to run the ++ operator that a SyntaxError is returned. This is because Python interprets only the first + operator and cannot interpret what to do with the second.

One alternative is simply to modify the original variable:

What is actually happening here? Because integers are immutable, when we add 1 to the integer we actually create a new variable. Let’s confirm this by checking the IDs of the variables before and after modification:

We can see that the ID of the variable has changed when we mutated.

The approach shown above works, but it’s also a bit tedious. We can implement an alternative to this approach. This alternative is the augmented assignment operator. The way that works is by reassigning the value to itself in a modified way.

Similar to the approach above, this does create an entirely new variable (since integers are immutable). Let’s confirm this again by simply printing the IDs:

In the next section, you’ll learn how to emulate the -- decrement operator in Python.

How to Decrement a Value by 1 in Python

We can simply use the -= augment assignment operator to decrement a value. Let’s see what this looks like:

While this approach is slightly longer than write a--, it’s the shortest workaround that is allowable in Python. Because Python integers are immutable, we need a shorthand way to reassign a value to itself.

In the next section, you’ll learn how to use the augmented assignment operator to increment a value in a Python while loop.

How to Increment a Value in a Python While Loop

Python while loops will continue to execute a Python statement (or statements) while a condition is true. In many cases, you can easily set a loop to continue running until a value is equal to a certain value. For example, you can set a loop to run ten times by incrementing a value by 1:

This is an extremely simplified example, but because of the versatility of Python while loops we can actually take this much, much further. For example, we could embed conditions into the loop or append to different data structures.

How to Increment a Python String

In this final section, you’ll explore how to increment a Python string. Because strings, like integers, are immutable in Python, we can use the augmented assignment operator to increment them.

This process works similar to string concatenation, where normally you’d add two strings together. Let’s see what this may look like:

We can simplify this using the augmented assignment operator:

There are a few important notes about this:

To learn more about the augmented assignment operators, check out the official documentation here.

To learn more about related topics, check out the following articles:

Tags:PythonPython Strings
previousPandas: Get the Row Number from a Dataframe
next3 Ways to Swap Variables in Python

4 thoughts on “Python Increment and Decrement Operators: An Overview”