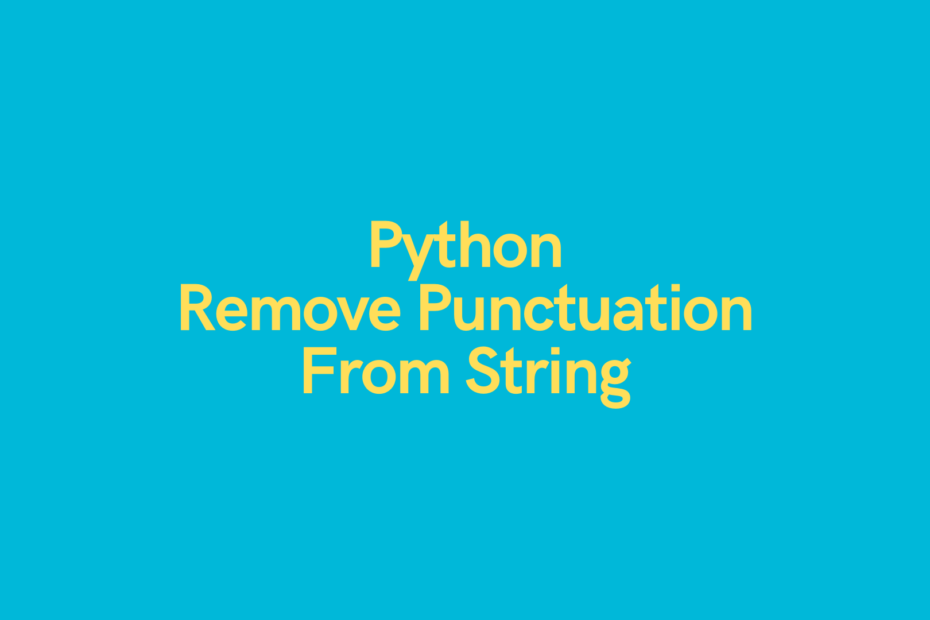 Being able to work with and manipulate strings is an essential skill for any budding Pythonista. Strings you find via the internet or your files will often require quite a bit of work in order to be able to analyze them. One of the tasks you’ll often encounter is the ability to use Python to remove punctuation from a string.

The Quick Answer: Use .translate() for the fastest performance

Use Python to Remove Punctuation from a String with Translate

One of the easiest ways to remove punctuation from a string in Python is to use the str.translate() method. The translate method typically takes a translation table, which we’ll do using the .maketrans() method.

Let’s take a look at how we can use the .translate() method to remove punctuation from a string in Python. In order to do this, we’ll import the built-in string library, which comes bundled with a punctuation attribute.

The .maketrans() method here takes three arguments, the first two of which are empty strings, and the third is the list of punctuation we want to remove. This tells the function to replace all punctuation with None.

In case you’re curious what punctuation are included in the string.punctuation, let’s have a quick look:

Want to learn more? If you want to learn how to use the translate method (and others!) to remove a character from a string in Python, check out my in-depth tutorial here.

Use Python to Strip Punctuation from a String with Regular Expressions

The Python regular expression library, re, feels like it can do just about anything – including stripping punctuation from a string!

Let’s see how we can use regex to remove punctuation in Python:

This is a great approach that looks for anything that isn’t an alphanumeric character or whitespace, and replaces it with a blank string, thereby removing it.

Use Python to Remove Punctuation from a String with str.replace

The str.replace() method makes easy work of replacing a single character. For example, if you wanted to only replace a single punctuation character, this would be a simple, straightforward solution.

Let’s say you only wanted to replace the ! character from our string, we could use the str.replace() method to accomplish this. Let’s take a look at how to:

In the next example, you’ll learn how to use a for loop to replace all punctuation from a string using a for-loop.

One of the things to note here, is that we’re writing over our original string here. We can’t assign a new string, as it will continuously replace itself.

Now that you’ve learned a number of methods, let’s see which of these methods is the fastest.

What is the fastest way to strip a Python String from Punctuation?

In this tutorial, you’ve learned three different methods to remove punctuation from a string in Python. Let’s see which of these methods is the fastest.

For this test, we created a string that’s over 1,000,000,000 characters long and removed all punctuation from a string using Python.

Let’s take a look at the results:

Of course, speed isn’t everything, but finding code that significantly slows down your code will often lead to a poorer user experience.

To learn more about the str.translate() method, check out the official documentation here.

Tags:PythonPython Strings
previousPython: Find an Index (or all) of a Substring in a String
nextPython While Loop with Multiple Conditions