How to Decrement a For Loop in Python 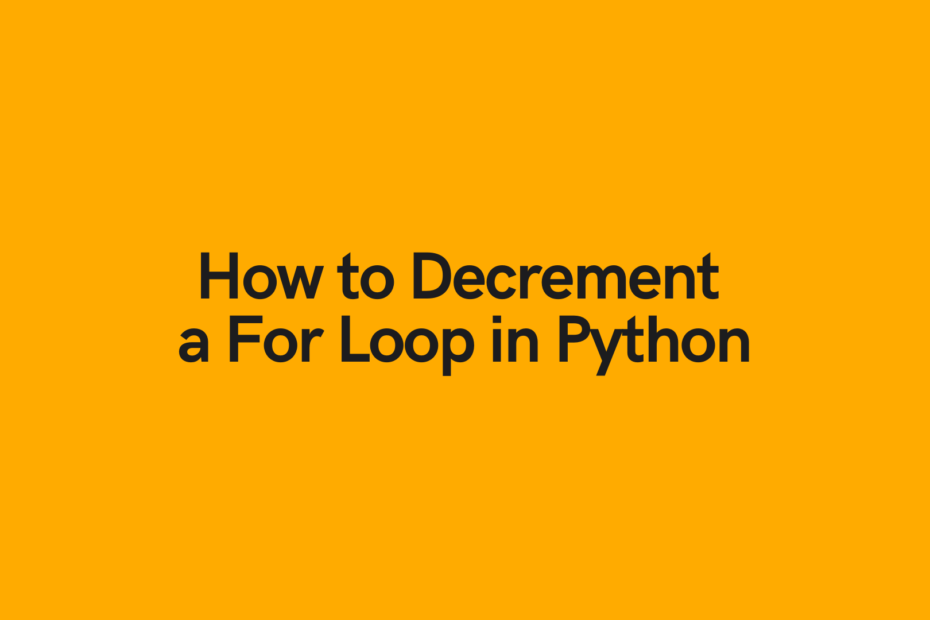 What does it mean to decrement a Python for loop? Generally, we increment a for loop, meaning we loop over our sequence in increasing order. For example, looping over the list containing [0,1,2,3] would start at 0 and increment by 1, through to the end of the list. By decrementing, we loop over our list from the last value and decrease from there, to the first value. This would result in our list being looped over in reverse order, resulting in [3, 2, 1, 0].

The Quick Answer: Use reversed

Use the Range Function to Decrement a For Loop in Python

The Python range() function is an incredibly versatile function, which allows us to generate a sequence of numbers. Let’s take a look at what the function looks like:

Let’s break these parameters down a little further:

In order to decrement a for loop in Python, we can make creative use of this function.

Let’s load a Python list and see how we can use a for loop to print it in reverse order:

We can loop over this list in reverse order by making the starting position the last index and decrementing by 1. Let’s see how we can do this:

We can simplify this by simply including all the instructions inline, as shown below:

In the next section, you’ll learn how to use the reversed() function to decrement a for loop in Python.

Use the Reversed Function to Decrement a For Loop in Python

Let’s see how we can loop over a Python list in reverse order using the reversed() function:

We can see that this approach is a lot cleaner to write and to read! It is also a little bit less flexible than using the range() function, which allows us to, for example, iterate over a list in reverse order and decrement by a number other than 1.

The Python reversed() function returns a list-like object. We can see what this looks like printing out the object:

As seen, we can iterate over the reversed object. If we wanted to see its contents all at once, we can convert it back to a list, by using the list() function:

In the next section, you’ll learn how to decrement a while loop in Python using augmented assignment operators.

Decrement a While Loop in Python

Let’s see what this looks like and then explore how it works:

The way that this works is by first setting an integer value to the last index of our list. We can get this position by subtracting 1 from the length of the list. We then loop over our list while the value of our integer is greater than or equal to 0.

After each iteration, we decrement the value of our integer by 1, using the augmented assignment operator.

In this tutorial, you learned how to use Python to decrement a for loop and a while loop. You learned how to iterate over an object in reverse order, using both indexing with the negative step counter as well as with the reversed function.

To learn more about similar topics, check out my tutorial listed below: