Working with External Libraries in Python 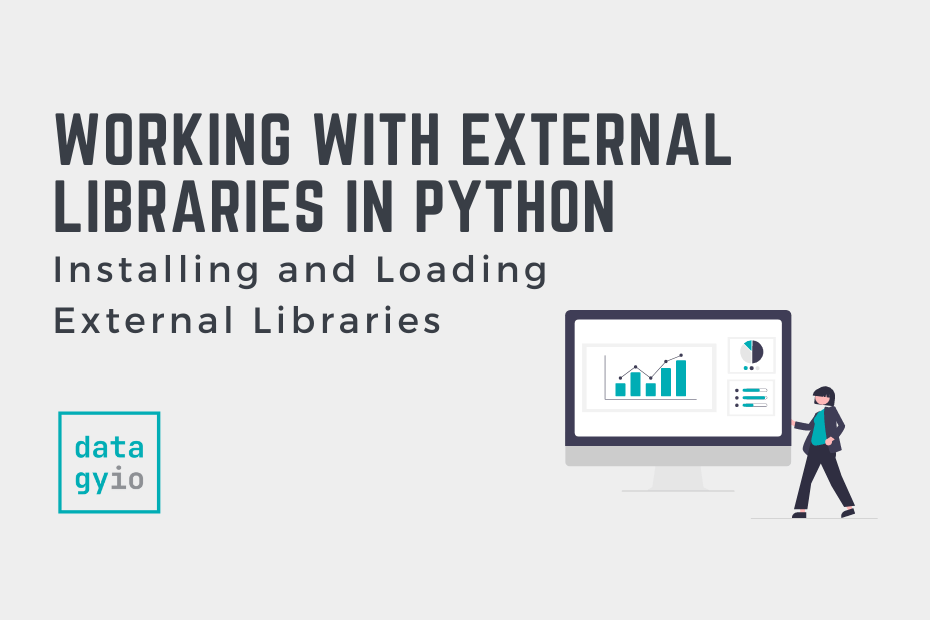 What are External Libraries in Python?

So far, you’ve learned how to use the built-in functions and objects that come with Python. One of the biggest perks of using Python is the availability of vast numbers of libraries. These libraries are incredibly diverse and of high quality and make data science much, much easier in Python.

An external library is a custom set of functions, objects, and more that were written to eliminate having to write code from scratch. There are hundreds of thousands of external libraries with a vast variety of abilities that they provide.

Other libraries need to be installed. These libraries aren’t part of the standard library, but can provide many additional features. Later in this tutorial, you’ll learn how to install libraries using different tools.

Why Use External Libraries in Python?

Python developers make many of their tools available for free. This gives you the opportunity to produce data analysis much quicker and reliably than coding everything yourself.

How to Import an External Library in Python

Let’s take a look at how we can import an external library in Python. In this section, we’ll start off by using a library that’s part of the standard library, meaning that you don’t need to worry about installing it.

In order to import a library, we use the import keyword. Let’s see how we can import the statistics library.

It’s as easy as that! We now have access to all the functions and objects available in the statistics library. Let’s take a look at what happens when we check the type of the library using the type() function.

We can see that the type is a 'module', which is an interchangeable term of library.

Import Only a Single Function in Python

One of the functions available in the statistics library is the median() function. In order to actually use the function, you need to prefix the function with the library name. If you’re only planning on using a single function from the library, you can import only that function.

Let’s see how this works:

Importing a Python Library with an Alias

You can also change the name of a library as you’re importing it by using an alias. This allows you to use an abbreviation for different libraries. You’ll see this used very frequently when we start working with other libraries like numpy, pandas and seaborn.

In order to use an alias, we use the as keyword. Let’s import the statistics library using the alias st.

What should you keep in mind when using an alias?

When importing libraries it’s important to follow conventions! It may seem fun to give your imported libraries a cheeky alias, but using conventional aliases, or no aliases at all (when that’s convention) allows you to troubleshoot much quicker!

How to Install External Libraries in Python

There may be many times when you need to install an external library. While Python comes with many excellent modules as part of its standard library, there are many libraries that you may wish to install. Later in this tutorial series, you’ll make extensive use of libraries such as pandas and seaborn in order to work with tabular data and to produce beautiful data visualizations.

In order to install these modules, we can make use of the pip terminal command. pip is the package installer for Python and allows us to install modules from the Python Package Index.

Typically pip will come installed when you install Python. That being said, you may not actually have it installed. In order to check whether or not it’s installed or not, run the following in either your command line or terminal:

What if you don’t have pip installed?

If you end up not having Python installed, you can install it directly by downloading it from bootstrap. Download the file linked here and then run it by running python get-pip.py in your terminal from the location where you downloaded the file.

Once you have pip up and running, you can install external libraries which aren’t part of standard library using pip in the terminal.

For example, to install the pandas library, you can simply run the following in your terminal or command line:

pip will handle installing the library by downloading any requirements for it, such as other required dependencies. Feel free to install pandas now or wait until we make it to that section of the course!

How to Use External Libraries in Python

Now that you know how to import and install external libraries, let’s take a look at how to actually use them. We’ll take a closer look at the statistics library again. Let’s begin by importing the library again.

One of these functions is the median() function. The median is the middle value, or a value that separates the higher half of a distribution from the lower half.

In order to access the median() function, you need to access the function from the library. It’s not enough to simply call median(). We need to call statistics.median().

How can you learn how to use the median() function? You can use the help() function in order to gain access to its docstrings:

We can see from the docstring how the method works. We can pass in a list of numbers to return the middle value.

This is great! We don’t need to develop or test a function ourselves, but we can simply import the function!

Again, Why use Python Libraries?

Now that you have a much stronger understanding of Python libraries, let’s take another look at how much benefit they give us. We’ll take a look at calculating the standard deviation from scratch and then take a look at how to do this using a built-in library.

As a quick refresher, the standard deviation measures the amount of dispersion in a normally distributed set of data. It’s calculated using the following formula:

Let’s take a look at how we can calculate this using Python. Don’t worry if some of these pieces don’t yet make sense. If you are interested in doing a deep dive into this, check out this in-depth tutorial on the standard deviation in Python.

This is a lot of code! There’s a lot of overhead and complexity in this that’s probably unnecessary. We could, put simply, just use the stdev function from the statistics library. Let’s see how much easier that is!

Isn’t that much, much easier? In the next section, you can complete a couple of checks to see solidify your understanding.

Use the sections below to check your understanding of external libraries in Python:

What does it mean for a module to be part of the standard library?

Modules that are part of the standard library come installed with Python. This means that you don’t need to check if the library is installed and that any user of Python (with the same version of Python) will have access to these libraries.

How would you import the math library?

How can you find out what functions a library has?

How would you install the pandas library?

To learn more about related topics, check out these tutorials: