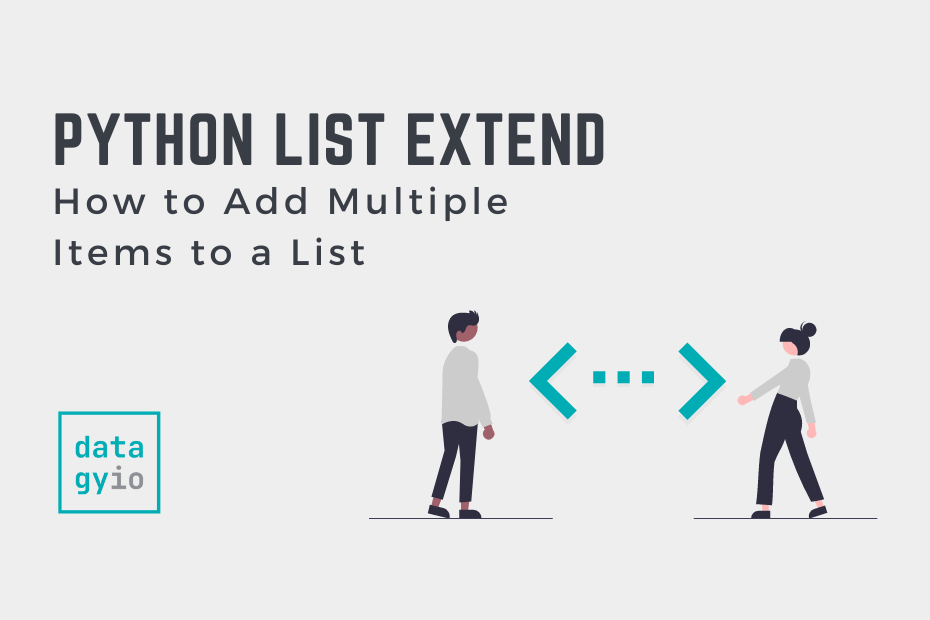 The Python extend() method takes all elements of another iterable (such as a list, tuple, string) and adds it to the end of a list. This gives it a key benefit over the .append() method, which can only append a single item to a list.

Let’s take a look at a few key characteristics of the Python .extend() method:

Let’s explore the syntax of the Python list .extend() method:

The operation takes place in-place, meaning that you don’t need to re-assign the original list to itself. If you’re used to needing to re-assign items to themselves, this can take a little bit of time to get used to.

How to Add Items to a List with Python Extend

Now that you have an understanding of how the method works, let’s take a look at an example. We’ll start with two lists and append one to the other.

We can see that each item is added sequentially to the list that is being extended. The image below breaks this down a bit further:

We can see that each item in the list is added in the original order.

Now that you understand how the method works, let’s take a look at some oddities of the method. When we want to append a single item our list using the .extend() method, we need to be careful about how we do this.

Let’s first take a look at how to add a single number to our list:

We can see by passing a list that contains only the single item the method works as expected.

Let’s now take a look at another example, where we have a list of strings. We can try and add another string to it using the .extend() method:

We can see that we didn’t really get what we wanted! While the method didn’t raise a TypeError, it appended each letter separately. This is because a string is iterable, meaning that Python interpreted that we wanted to iterate over the string and add each letter.

In order to add only the string as a single item, we need to pass it into a list or another iterable container:

In the following sections, you’ll learn about the difference between the Python .extend() method and other popular ways of adding items to a list.

We can see that by trying to add multiple items to a list using .append(), that all the items are added as a single list.

In order to be able to append each item separately using the .append() method, we would need to use a for loop:

Let’s take a look at an example of how this works:

We can also abbreviate this using the augmented assignment operator to the following:

In the next section, we’ll take a look at the performance of these different methods.

Performance Comparisons of Adding Items to a List in Python

We can time the execution time of different methods by using Jupyter Notebooks and the %%timeit command. The table below breaks down the different methods and their run times when attempting at concatenate a list of one million items to it:

In this tutorial, you learned how to use the Python .extend() method to add multiple items to a list. You learned how the method works and how it can be used to extend lists using other iterable objects. You learned some of the quirks of using this method, such as when adding single items to the list.

You then learned how the .extend() method compares to other ways of adding items to the end of a list, including the .append() method and using the + operator. Finally, we explored the performance of different methods, indicating that when working with large lists that the .extend() method is the clear winner.

To learn more about related topics, check out the articles below: