How to Append to Lists in Python – 4 Easy Methods! 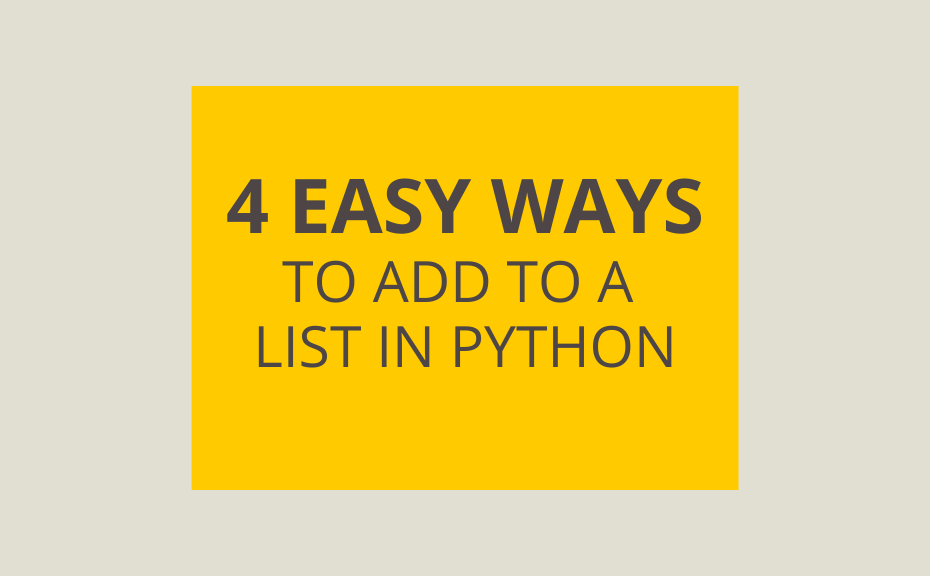 A Quick Overview of Lists in Python

Lists in Python are mutable, meaning they can be changed after being defined. They can also contain different data types, including strings, integers, floats, and even other lists!

To given an example of this, let’s create a list and access its first and its last item:

If you want to check out our tutorial on List Comprehensions, check out this link.

Append to Lists in Python

The append() method adds a single item to the end of an existing list in Python. The method takes a single parameter and adds it to the end. The added item can include numbers, strings, lists, or dictionaries. Let’s try this out with a number of examples.

If we wanted to access the number 4 – the first value of the fourth item of sample_list – we would have to write the following code:

While the append method will always add an item to the end of a list, we can define where we would want an item added using the insert method.

Let’s try this out with an example:

Check out some other Python tutorials on datagy, including our tutorials on Pivot Tables in Pandas and All You Need to Know about For Loops in Python.

We can also insert items using a negative index. The key thing to note here is that the index of -1 would insert the item in the second last spot:

The third method to add to a list in Python is to extend a list using the Extend() method. The extend method works quite similar to the append method, but it adds all items of another iterable item, such as a list or a tuple. If we had tried this with the append method, it would have inserted the whole list as an item in itself.

Let’s try this out with an example:

This also works well with tuples:

List concatenation works quite similar to the extend method, but uses an operator instead of a method to accomplish the same for multiple lists. Let’s try this out with an example:

We could also re-write this in Pythonic shorthand:

Conclusion: How to Append to Lists in Python

In this post, we explored multiple ways to add to lists in Python, including the append, insert, and extend methods. If you have any further questions about the methods, leave a comment or check out the official documentation for append(), insert(), and extend().

Tags:PythonPython Lists
previousPython: Count Number of Occurrences in a String (4 Ways!)
nextHow to Get Column Names in a Pandas DataFrame

1 thought on “How to Append to Lists in Python – 4 Easy Methods!”