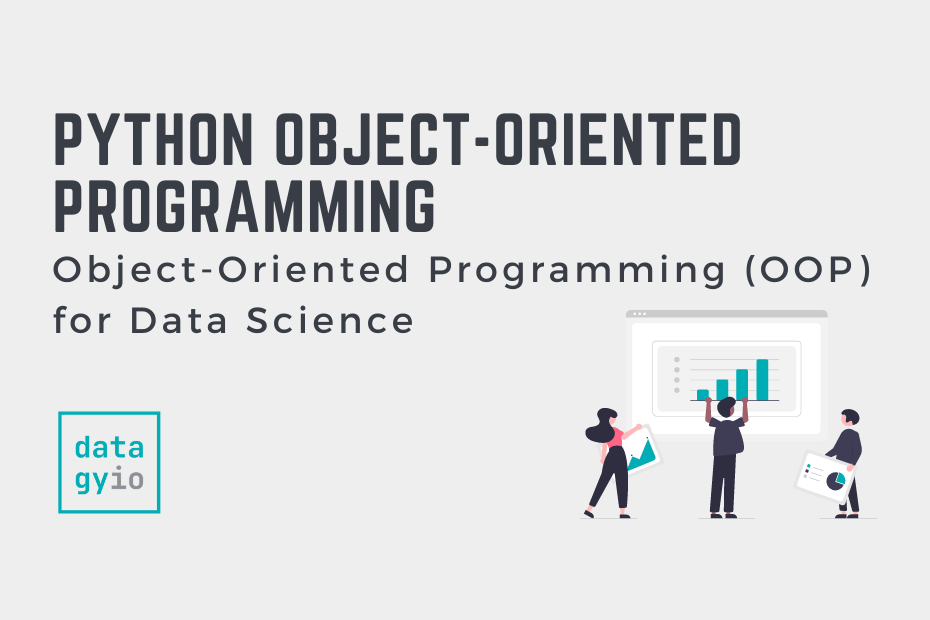 By the end of reading this tutorial tutorial, you’ll have learned:

Object-oriented programming (or OOP) refers to a programming paradigm that’s based on the concept of, well, objects. In this paradigm, objects can contain both data and code. These objects can also have attributes (properties) and methods (behaviors).

So, in short, objects have properties and behaviors. Let’s think of an object representing a person, for example. The person has many different properties, such as a name, age, hair color. They can also do things, such as walk or greet people. Object-oriented programming models real-world entities in the form of organized code that can have properties and can do things.

Object-oriented programming is focused on the following concepts:

In many cases in data science, the paradigm of procedural programming will be sufficient. This structures a program almost like a recipe or an instruction manual. In this case, each line of code is executed in order. So, what’s in it for you to learn object-oriented programming when all you want to do is data analysis?

There are two main reasons for doing this:

In the early stages of working with Python for data science, it may seem like the concepts behind object-oriented programming don’t make sense or don’t apply. But don’t despair!

Learning to think in the paradigm of object-oriented programming allows you to better understand how many Python applications work. For example, a Pandas DataFrame is a complex object that has many attributes and methods. Simply knowing that a DataFrame is an object allows you to understand why the DataFrame has certain methods, while, say, a Python list doesn’t.

Why Create Objects in Python?

In many cases, Python provides you with the ability to define simple concepts using primitive data types such as lists and dictionaries. For example, you could create a list to hold information about students in your class. Let’s create a few lists to contain this information:

While we could turn these lists into dictionaries, or a defaultdict, there are still a number of issues with this approach. You need to define functions to allow these dictionaries to do something. These functions are then accessible for anything else in your program. This can make it quite confusing for readers of your code and lead to unintended consequences.

All of these issues can be resolved by creating a class, which can hold different pieces of information, but can also contain functions. In the next section, you’ll learn how to create your first class in Python!

Objects and Classes in Python

In Python, you can define a class using the class keyword. The keyword is followed by the name of the class and a colon. That, in itself, is enough to define a class! Let’s create a new class following our convention above:

By convention, a Python class is written with capital letters separating each word. If we had a multi-word class, then each word would be a capital letter.

Let’s break down a few pieces of terminology before moving on to something more detailed:

Let’s learn how we can expand on our method by giving it some properties. This is done using what’s called the __init__ method, also known as the constructor method.

Right now, our Person class doesn’t contain any information nor does it do anything. Creating this class, as it is right now, doesn’t actually accomplish anything. Let’s see how we can expand on this by setting the initial attributes of a person.

Our class Person now has three attributes, name, age, and company. When we create a new person, we can pass these parameters in to make our person a bit more interesting!

At first glance, this function looks a little odd. The __init__() function is known as the constructor method. This method sets the initial state of the object, by initializing that instance of the class.

The __init__() function can contain any number of parameters, but the first argument must always be the self variable.

Understanding self in Python Object-Oriented Programming

When you created the first object above, the variables that were passed in were assigned the self bindings. So, for example:

So, self points to the instance of that class. In Python, self enables objects to access its attributes and methods and makes these instances unique.

So, when should you use one over the other?

This object now has four attributes. If you’re working in an IDE such as VS Code, these attributes are actually even accessible via Intellisense. This allows you to be save some time typing and make your attribute names are called correctly.

Let’s see how we can print out the attribute for company in our object Nik.

We can even modify these attributes by simply directly assigning a new value to them. Say I had a birthday and wanted to update my age, I could simply write:

The state of that object is maintained and can be modified. This is one of the perks of using object-oriented programming – you can run your program while your program’s data is maintained in a helpful, easy to understand manner.

So far, the objects you’ve created have contained information, but they don’t actually do anything. In Python, we use functions to create repetitive actions. In object-oriented programming, functions also exist. However, methods refer to functions contained in an object.

Let’s define our first object method! We’ll create a method that allows our object to greet someone using their name:

Defining an object method is nearly the same as creating a regular function. There are a number of key differences:

Remember, self points to that instance of the object. Because of this, the method can access its attributes. However, even if the function doesn’t require any attributes from self, the argument is required.

While the complexity of our method have_birthday() is quite straight-forward, this drives home the point of object-oriented programming. We are able to abstract away the mechanics behind what the program does behind an easy-to-understand method.

What’s special about child classes in Python is that:

Let’s see how we can leverage the concept of inheritance to create a new class: Employee. Each Employee will have the same attributes and methods of a Person, but will also have access to some of its own:

Now that we’ve created a subclass of Employee, we can create these objects. The objects will have access to the same methods and attributes, but also any additional attributes or methods. There are a few things to note here:

Let’ see how we can access a parent class method:

In the example above, while the class Employee doesn’t explicitly define the greet() method, it has access to it by the power of inheritance! You can also force inherited classes to conform to a certain behavior using abstract base classes.

Now, let’s say you wanted to ensure that your employees used a more formal greeting. The parent class, Person, you defined earlier already has a greet() method. Let’s see how you can modify the behavior of the child class, Employee, to have its own unique greeting.

In Python, polymorphism is as simple as defining that method itself in the child class. This allows you to have overwrite any parent methods without needing to worry about any overhead. Let’s see how we can implement this:

Here, you defined a new method greet() that behaves differently than the method of the same name in the parent class. This process is known as method overriding. Polymorphism allows you to access the overridden methods and attributes in a child class.

When Should You Use Object-Oriented Programming?

Python objects are everywhere – literally. Everything in Python is an object (whether it be an integer or even a function). Understanding how object methods and attributes work allow you to better understand how Python itself works. Objects are a critical part of data science libraries. Understanding, for example, that a DataFrame is an object opens up the understanding of how DataFrame methods can work to manipulate your data.

It’s time to check your understanding. Give the exercises below a shot. If you need help or want to check your solution, simply toggle the question to reveal a sample solution.

Develop an Employee method that gives the employee a 10% raise.

Python methods can also take arguments. Modify the greet() method in the Person class to pass in a person’s name to personalize the greeting.

What does super() do?

The super() function allows you to inherit methods and attributes from a parent class when it’s passed into a child class’s __init__() function.