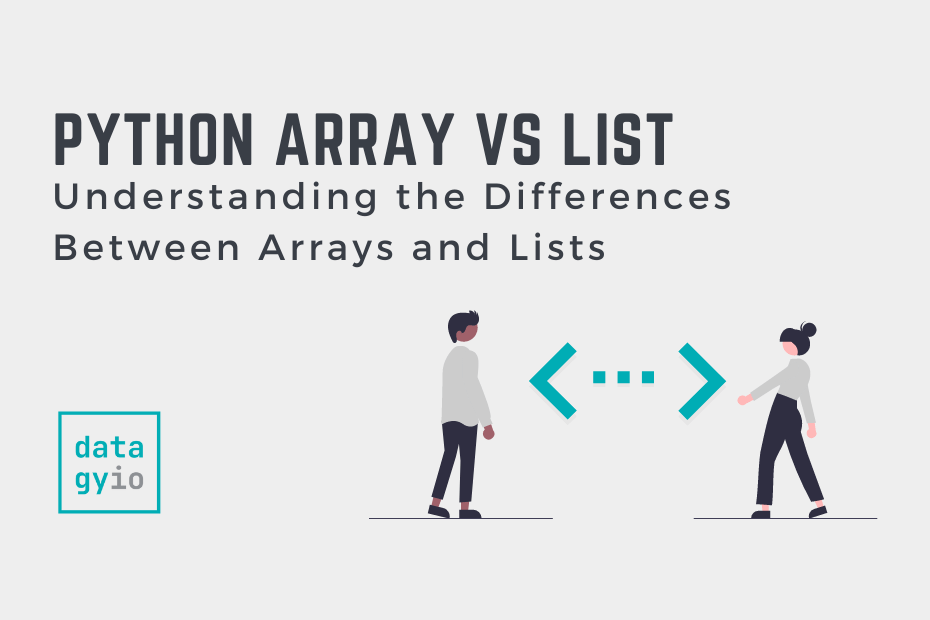 In this post, you’ll learn the difference between arrays and lists in Python. Both these data structures let you store data in Python and share many similar properties. However, they also let you do quite different things and knowing when to use which can make you a much stronger programmer!

In particular, you’ll learn how the Python list is different from both the array and the NumPy array. You’ll get a strong understanding of when to use either of these data structures.

A Python list is a built-in data structure that can hold a collection of items. They have a number of unique properties, making them different from other data structures. In particular, Python lists are:

In the next section, you’ll learn about arrays in Python.

What is a Python Array

Python comes with a module built-in, array, which can be used to create arrays in Python. While arrays maintain most of the characteristics of Python lists, they cannot store items of different data types. They can, however, contain duplicates, are ordered and are mutable.

What is a NumPy Array

An array type that you’ll likely encounter more frequently compared to the array library’s array, is the NumPy array. The NumPy array is commonly used for numerical calculations. However, it’s much more akin to the Python list. In fact, it carries all of the same properties of a Python list (including storing different data types). Because NumPy is intended to be used for numerical calculations, it also comes with many different methods and functions to support this.

Let’s see how we can create a NumPy array containing the same items as our original list:

In this section, we’ll compare the Python list, the array, and the NumPy array:

When to Use a List Over an Array in Python

You should use a Python list over an array when you are simply wanting to store a small collection of items to which you don’t want to perform any mathematical operations. Because Python lists are easily created and mutated, they make great candidates for these types of operations.

However, if you want to perform mathematical operations, the work becomes a bit trickier. Let’s image we wanted to add 5 to our original list numbers. We would need to use either a for loop or a list comprehension to add the value, element by element.

When to use an Array over a List in Python

You should choose to use an array over a list in Python if you know that you will need to perform mathematical operations to it. Similarly, if you need to store complex data of similar structure (such as matrices), this can be a more memory-efficient process.

Let’s see how easy it is to replicate our early example using a NumPy array:

In this tutorial, you learned the differences between Python lists and the two types of arrays available in Python: the array library and the NumPy library. You then learned how they are similar and what they do differently. Finally, you learned when to use which option, specifically targeting different use cases