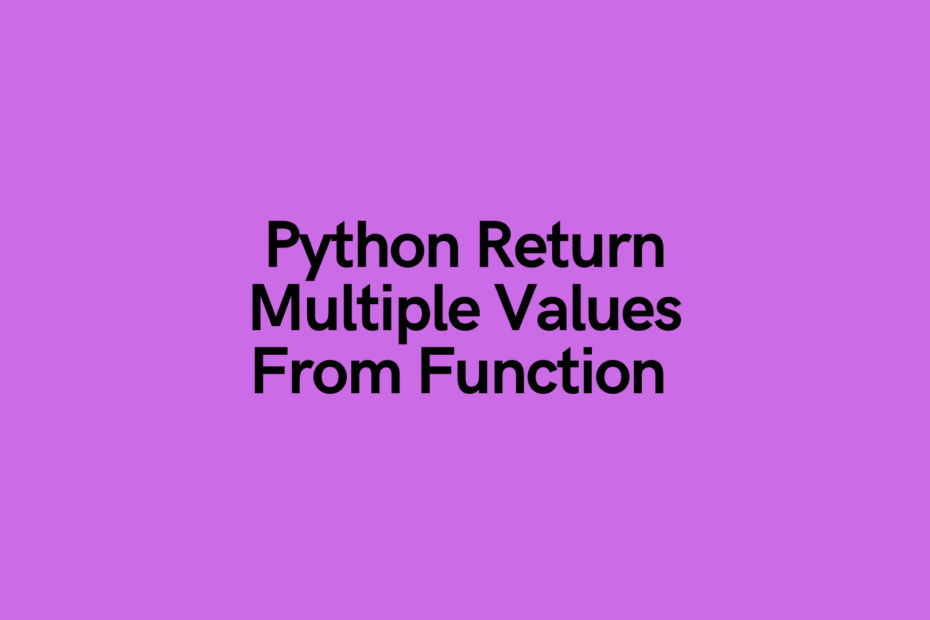 In this tutorial, you’ll learn how to use Python to return multiple values from your functions. This is a task that is often quite difficult in some other languages, but very easy to do in Python.

Being able to work with functions is an incredibly useful skill that allows you to more readily follow the DRY (don’t repeat yourself) principle. Functions allow your code to be significantly more readable and less repetitive. All of this allows your code to be more maintainable and reduces complexity of the code.

The Quick Answer: Use Tuple Unpacking

How do Functions Return Values in Python?

In the example above, we have defined two different functions, return_one() and return_two(). The former of these returns only a single value. Meanwhile, the latter function, return_two(), returns two values. This is done by separating the values by commas.

In the next section, you’ll learn how and why returning multiple values actually works.

How to Return Multiple Values from a Python Function with Tuples

In the previous section, you learned how to configure a Python function to return more than a single value.

The way that this works, is that Python actually turns the values (separated by commas) into a tuple. We can see how this works by assigning the function to a variable and checking its type.

We can see in the code above that when we assign our function to a variable, that a tuple is generated.

We can verify this by checking the type of the value (1), for example. This returns: int.

Again, this might surprise you. If we changed our value to (1,), however, we return a different result.

A lot of this may seem like semantics, but it allows you to understand why these things actually work. Now, let’s learn how to assign these multiple variables to different variables.

Let’s look at the same function as before. Instead of assigning the return values to a single tuple, let’s unpack our tuple and return three separate values.

In the next section, you’ll learn how to unpack multiple values from a Python to variables with mismatched lengths.

In the example above, you learned how to return multiple values from a Python function by unpacking values from the return tuple.

There may be many times when your function returns multiple values, but you only care about a few. You don’t really care about the other values, but Python will not let you return only a few of them.

This happens because our assignment needs to match the number of items returned.

However, Python also comes with an unpacking operator, which is denoted by *. Say that we only cared about the first item returned. We still need to assign the remaining values to another variable, but we can easily group them into a single variable, using the unpacking operator.

Let’s see how this works in Python:

Here, we have unpacked the first value to our variable a, and all other variables to the variable b, using the notation of *b.

In the next section, you’ll learn how to return multiple values from a Python function using lists.

How to Return Multiple Values from a Python Function with Lists

One of the big differences between Python sets and lists is that lists are mutable in Python, meaning that they can be changed. If this is an important characteristic of the values you return, then this is a good way to go.

Let’s see how we can return multiple values from a function, using both assignment to a single variable and to multiple variables.

In the next section, you’ll learn how to use Python dictionaries to better understand return values.

How to Return Multiple Values from a Python Function with Dictionaries

Let’s take a look at a more complicated function that creates variables for speed, time, and distance travelled for a car.

If we returned this as a tuple or as a list, then we would need to know which variable represents what item. However, we can also return these items as a dictionary. When we do this, we can access each item by its key.

To learn more about Python functions, check out the official documentation here.

1 thought on “Python: Return Multiple Values from a Function”