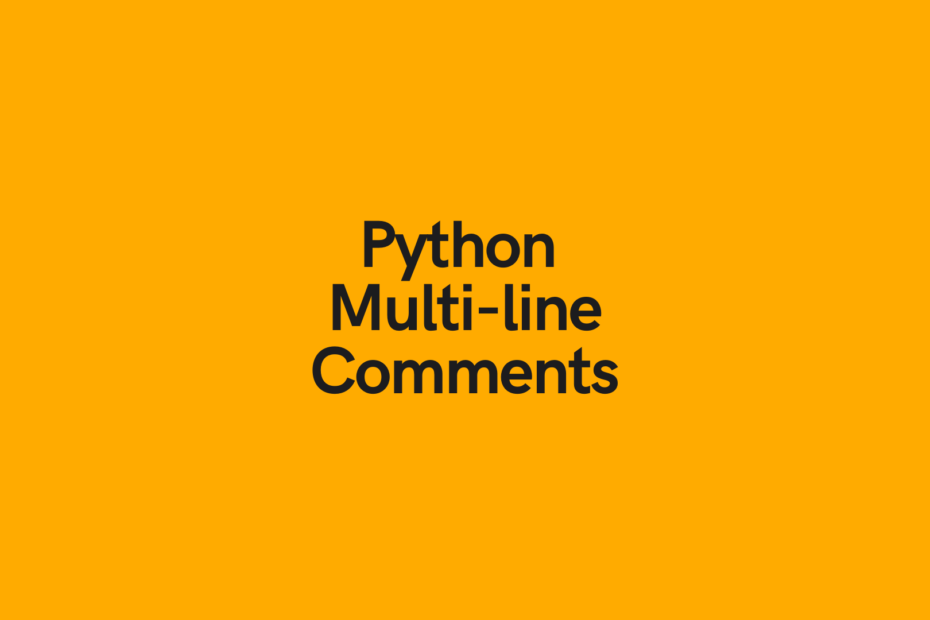 Many programming languages offer multi-line comments. Some of them, for example will use a /* comment */ notation that looks like this:

Python, unfortunately doesn’t offer this type of comment. But you do have options to let your comments go across multiple lines.

The Quick Answer: Use # to Create Multiline Comments in Python

Comments in programming languages are used to explain code and provide context. They often help make your code more readable by explaining the why of your code (i.e., why you are writing your code the way you are). Sometimes comments are also used to prevent code from running, and this is often referred to as “commenting code out”.

You have a number of different options of where you place the pound symbol:

Let’s take a look at a few examples:

In the next section, you’ll learn how to use the single-line comment to create a multiline comment in Python.

This is actually the approach that’s recommended by Python’s PEP-8 style guide. It also represents the only “real” way to create comments in Python. The approach that follows this section isn’t “really” a comment but rather a workaround.

While it may seem really overkill to have to comment out multiple lines. Many code editors like VS Code provide keyboard shortcuts to do this. For example, in VS Code, you can simply use CTRL+/ or CMD+/ to comment out a line.

Learning how to use these keyboard shortcuts can make easy work of something that feels tedious. Because of this, this operation becomes almost second nature and this makes it easier to live with the lack of official multi-line comments.

In the next section, you’ll learn how to use Python multiline strings not assigned to variables to emulate multiline comments in Python.

Let’s take a look at how we can Python to create strings that span multiple lines:

An interesting string about Python strings is that the Python interpreter ignores any strings that aren’t assigned to variables, meaning that they are treated indirectly as comments.

You may notice that these triple quote look very similar to Python docstrings. Docstrings are used to document a function and are created using triple quotes.

When you do not create triple quotes indented as the first line of a function, they are treated as simple strings.

Let’s see what the difference looks like in Python

Comments are incredibly helpful tools in programming. They allow us to document code, providing the rationalization as to why we do things. They also allow us to provide explanations of how complex pieces of code may work. They also serve an unintended purpose of allowing us to “comment out” certain sections of our code. This means to take code and turn it into comments so that it will not run when the program is run.

To learn more about comments in Python, check out the official documentation here.