Python Floor: Rounding Down with Python 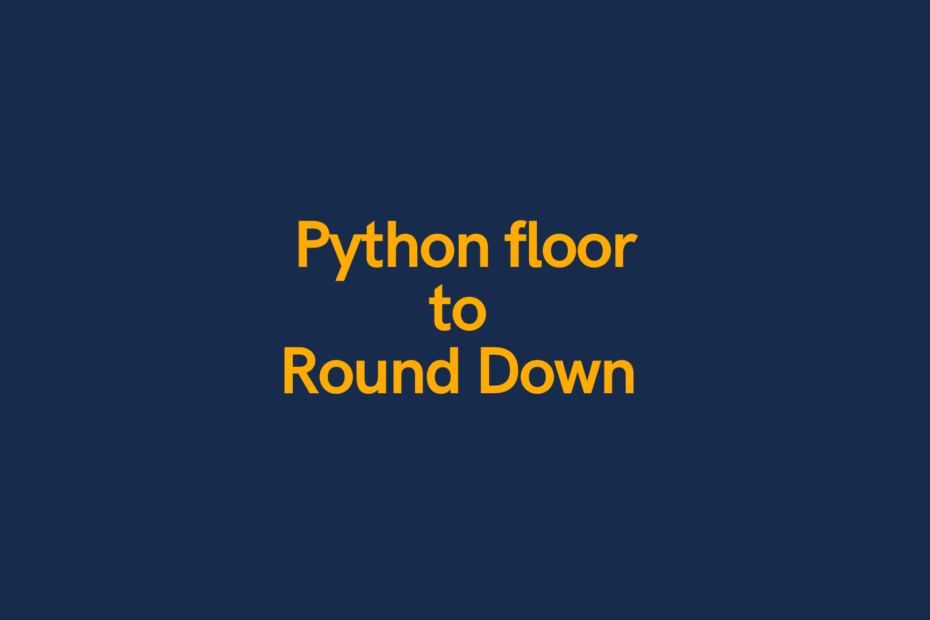 The Quick Answer: Python math.floor() Rounds a Number Down

What does it mean to round down?

When you round a number down, however, the number is rounded to the closest integer than is not greater than the number. For example, 7.6 would round to 7.

Knowing how rounding a number down works has many useful applications, especially when building your own Python programs.

In the next section, you’ll learn how to use the math.floor() function in Python to round a number down.

Python has a built-in library, math, which comes with a number of help mathematical tools like functions and constants. The function we’ll be using throughout this tutorial is the math.floor() function, which floors a number, thereby returning the closest integer of a number, x, that is not greater than x.

Let’s take a look at how the function works:

In the example above, we create a new variable, floored, by using the math.floor() function, and passing in a variable number.

Now that we have a good understanding of what the function looks like, let’s take a look at a few examples:

Let’s now take a look at how this function behaves differently in Python 2 and Python 3.

Difference Between Python Floor in Python 2 and Python 3

If you wanted Python 3 to return a float instead, you could simply write:

In the next section, you’ll learn how the math.floor() function works when applied to mathematical constants.

The Python math library comes with a number of different constants. For example, the value of pi can be found by using math.pi.

Let’s see how the math.floor() function interacts with some mathematical constants in Python:

We can see that while pi and e were able to be successfully used in the Python floor() function, infinity was not.

In the next section, you’ll learn the different between using int() and floor() in Python.

Difference Between Int and Floor in Python

While reading this tutorial, it may seem that we are really only removing the pieces following a decimal. In this case, you may be wondering why we wouldn’t simply convert the float to an integer.

Let’s take a look at an example where this seems to work:

In both cases, Python returned the same value.

But now let’s try this with a negative number:

When using negative numbers, Python will simply remove the values following the decimal place when using the int() function. That, however, is not really rounding the value down, as a rounded down negative number jumps to the lower whole number.

Need to automate renaming files? Check out this in-depth guide on using pathlib to rename files. More of a visual learner, the entire tutorial is also available as a video in the post!

Similar to using the floor function in Python, this type of division returns the floored result of dividing the two values.

This is actually very similar to using float division and flooring the result.

Let’s take a look at what I mean with an example:

Because of this, we can actually say that math.floor(a / b) == a // b. This can be a helpful item to know if you don’t want to import any additional packages for division.

To learn more about the math.floor() function, check out the official documentation here.

2 thoughts on “Python Floor: Rounding Down with Python”