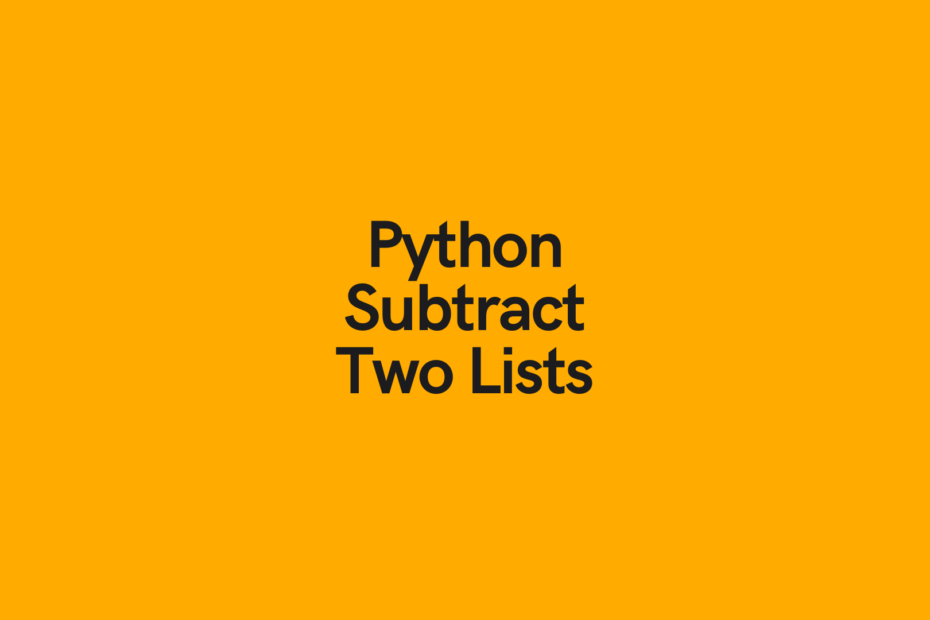 In this tutorial, you’ll learn how to use Python to subtract two lists. You’ll learn how to do this using the popular data science library numpy, for-loops, list comprehensions, and the helpful built-in zip() function.

Being able to work with lists is an important skill for any Python developer, whether a beginner or an advanced Pythonista. Subtracting two lists is less intuitive than simply subtracting them. Because of this, check out the four different methods provided below to find easy ways to subtract two lists!

The Quick Answer: Use Numpy subtract()

The popular numpy library is often used for working in data science, and, as such, comes bundled with a ton of different helpful methods to manipulate numerical data. One of the primary advantages that numpy provides is the array object, which is very similar to the Python list object.

One of the methods that numpy provides is the subtract() method. The method takes two numpy arrays as input and provides element-wise subtractions between the two lists.

Let’s see how we can use numpy and Python to subtract two lists:

In the next section, you’ll learn how to use the zip() function to find the different between two lists element-wise.

Let’s take a look at how we can use the Python zip() function to subtract two lists:

Let’s take a look at what we’ve done:

Now, let’s take a look at how to use a for-loop to subtract two lists.

Python for loops are incredibly helpful tools that let us repeat an action for a predetermined number of times. Because of this, we can loop over our two lists and find the different between their items.

Let’s see how we can use for loops to subtract lists:

Let’s take a look at what we’ve done with our for-loop method here:

Finally, let’s learn how we can use a list comprehension to subtract two lists. This method actually also uses the zip() function to create a new list that subtracts the two lists.

Let’s take a look at how we can do this!

In this post, you learned how to use to subtract two lists. You learned how to do this using the numpy.subract() method, the zip() function, a Python for-loop, and a Python list comprehension. Working with lists is an important skill that doesn’t always work as you’d expect, so being prepared for different challenges you might encounter is important.

To learn more about the numpy.subtract() method, check out the official documentation.

Tags:NumpyPythonPython Lists
previousPython List Length or Size: 5 Ways to Get Length of List
nextPython: Find All Permutations of a String (3 Easy Ways!)