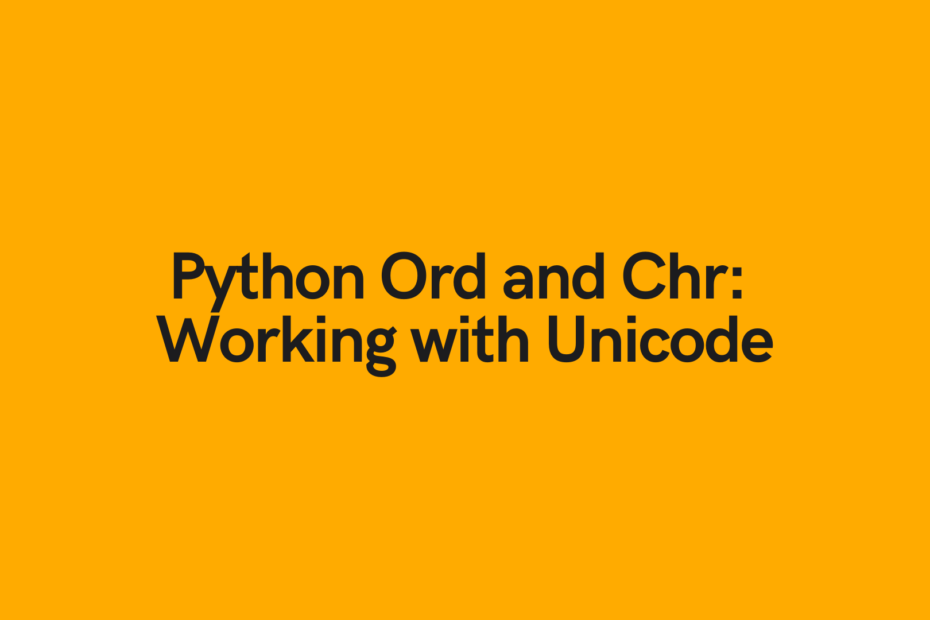 What is Unicode and How is it Used in Python?

Before diving into the ord and chr functions, let’s start off by covering why learning about Unicode is so important. At a basic level, computers work with numbers – because of this, the characters and letters that appear on a screen are numbers under the hood.

In the past, many different types of encoding existed. However, many of these were incomplete when considering the vast variety of characters that exist on the internet. In order to resolve this, the Unicode Consortium standardized specifications of how to represent characters in 1991.

The Unicode standard assigned numerical values to every type of character, from letters to symbols to emojis. The standard allowed computers to have a much easier time understanding symbols, especially as more and more symbols are being added to the internet.

The Python ord() function is used to convert a single Unicode character into its integer representation. We can pass in any single string character and the function will return an integer.

We can see the integer representation of the Unicode letter 'd' is 100. The function ord() works by taking a single character as its input, the character that you want to convert to an integer.

Let’s see what happens when we pass in more than one character:

We can see that passing in more than one character into the ord() function raises a TypeError. This happens because the function expects only a single character to be passed in.

In order to resolve the TypeError that is raised when more than one character is passed into the ord() function, we need to iterate over each character in the string. Because Python strings are iterable objects, we can directly iterate over these string values.

Let’s see how we can repeat our earlier example without raising a TypeError:

We can now see the integer representation of our Unicode string. This was accomplished by looping over each letter in the string and applied the ord() function to it.

In the next section, you’ll learn about the reverse of this function: the chr() function.

The Python chr function does the opposite of the ord function: it converts an integer representation into its corresponding Unicode string character. Let’s try to convert some values from integers into their Unicode counterparts:

We can go further and convert this list of numbers into an actual Python string. We can do this by using the .join() method. Let’s take a look at how this works:

As of the writing of this article, the function accepts any value between 0 and 1,114,111, representing all the available Unicode characters. If a value outside of this range is passed into the function, the function will raise a ValueError. Let’s see what this looks like:

We can see that, as expected, a ValueError was raised.

Working with Hexadecimal Data in Python Ord and Chr

In Python, Hexadecimal numbers are numbers represented in other common bases. The hexadecimal format changes the base to 16 and can be used with both the chr and ord functions. In Python, these numbers can be used by prefixing the integer with 0x.

We can convert an integer into its hexadecimal equivalent by using the hex function. Let’s give this a shot:

Now that we have the hexadecimal value for the number 100, we can pass this into the chr function to convert it to its Unicode representation:

Here we can see that the 0x64 is a valid number representation in Python. Python will interpret the 0x prefix to represent hexadecimal formats and will convert the value into its Unicode representation.

To learn more about the Python ord and chr functions, check out the official documentation here.

To learn more about related topics, check out these tutorials:

1 thought on “Python Ord and Chr Functions: Working with Unicode”