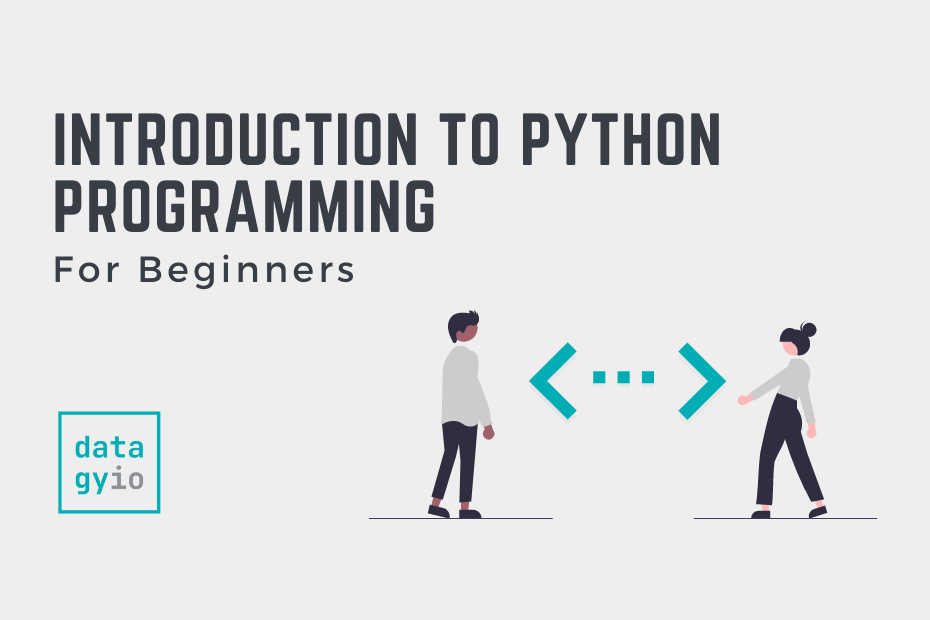 In this series, you’ll learn the key Python concepts you need to know to get started with using Python for data science. The course will take you from a complete beginner all the way through taking on your own machine learning projects!

This course doesn’t just put a bunch of words on a page. It guides you through the material in a hands-on way, providing you the opportunity to validate your learning with inline quizzes. You’ll also be able to write your code directly in the browser (!) or following along in a notebook or in your favourite code editor.

The course is split into four different sections:

Let’s start off with the technical definition of what Python is:

Python is an interpreted, high-level, general-purpose programming language. It is dynamically typed and garbage collected.

But, wait, what does this mean? Let’s break this down a little bit:

Where does the name Python come from? It’s actually named after the British comedy troupe Monty Python. It’s a perfect homage – the troupe was an experimental comedy series covering many different topics. This, too, is true for Python – it’s multi-purpose and offers a playground for people to develop their own solutions with ease.

Do you need to install Python?

To answer whether you need to install Python or not is a bit complicated. You may already have it bundled with your operating system. However, let’s not worry about it for now (we’ll cover off installing in a later section).

I want to let you dive into the world of Python as quickly as possible. Writing code is, after all, the best way to learn. Because of this, the following sections will include simple quizzes that allow you to better test your learning. Python interpreters have also been built into the tutorial in order to actually let you play with code without having to worry about installing Python.

Let’s get started by writing our first program! Let’s be a little conventional and print out a "hello". What does it mean to print something in Python? Whenever we want to show some output to the screen or some output device, we can use the print() function.

Let’s give this a shot! Take a moment to look at the code below. What do you think it does? Once you’ve reflected on this for a moment, click the play button and see what’s returned.

Cool, right? Now that you’ve done this, let’s explore the interactivity. Click the pencil icon to enter edit mode. From there, try printing something else.

Try printing some of the following:

When you enter the above code into the code editor, you get the following returned:

We can see that each of these statements is printed on a new line and that the code doesn’t include include the single quotes you had placed around the inputs.

What do those quotes actually mean? Characters placed between quotes (whether single or double) represent a string data type.

Python strings are sequences of unicode characters, which is an encoding format used to represent consistency in characters across multiple languages. We can create strings using single quotes (this 'this'), double quotes (like "this"), or triple quotes (like """this"""), though the last version is used generally for multi-line strings.

Now let’s dive into the wonderful world of Python variables and take our understanding of strings even further.

In this section, you’ll learn about Python variables, starting off with what variables are. You can think of variables as containers that store information and reference different objects. It can often be helpful to think of them as boxes, where the items inside that box may change, but the container stays consistent.

We can create a variable in Python by assigning an object using an equal sign, =.

Let’s create a variable message and store a welcome message. We can then use the print() function to display our message.

Let’s take a look at a couple of particular notes here:

There are a couple of rules and best practices to help you name your variables:

Now that you have a good, preliminary understanding of Python variables, let’s take a little bit of time to dive into using Python to do math!

Now let’s take a look at how to actually do some math in Python, by learning a bit about Python integers, ints, and floating point decimals, floats.

There are also complex numbers, which sit outside the scope of this course.

When we’re working with numbers, we may be interested in doing math with them. Python comes with operators that allow us to perform mathematical operations on different numbers.

For example, we could write the following arithmetic operation:

This returns the value of 3.

The table below breaks down the different operators that are available in Python:

Let’s take a look at a few examples. The section below shows the print() function call with a different operation in it.

Take a look at the code and try and guess what the result will be! Toggle the tab by selecting the value on the right to see if the results match what you expected!

Let’s start with some exponents:

Finally, let’s take a look at the modulus operator, %:

Is the modulus operator a bit confusing? The way that it works is by dividing the two numbers and returning the remainder of the division. In the example above, 3 goes into 10 three times, leaving the value of 1.

Try writing some code into the editor below and see if the results match what you’d expect. Remember to wrap your operation in a print() function in order to have the results displayed.

Congratulations on making it through the first day of learning Python! You learned a lot of information today and it’s ok to feel a little bit overwhelmed.

To recap, you learned that Python is an interpreted language that can be used for many different domains. You also learned how to create variables in Python and you worked with three data types: strings, integers, and floats. Finally, you learned how to do some early math using Python.

In Day 2, you’ll learn more about how to do math in Python and you’ll dive into creating your own functions! See you there.

Tags:Python
previousPandas: How to Drop a Dataframe Index Column
nextRound Number to the Nearest Multiple in Python (2, 5, 10, etc.)